The Shakhtar Donetsk home jersey for the season 2012-13. The image is from a UEFA Champions League match against Chelsea during the 12-13 campaign. 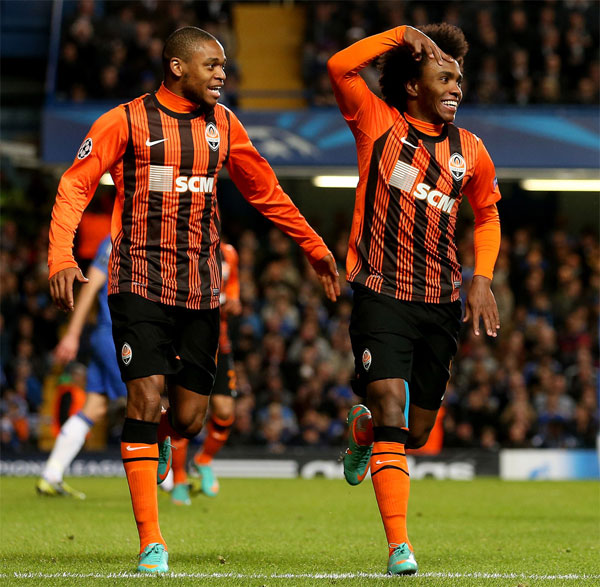 And the name and number kits in cyrillic letters. The photo is from the Shakhtar Donetsk locker room.

MM Sports Quiz 1 | Soccer is the name of the Game

We hereby invite you to participate in this multiple choice quiz about soccer (and sporting goods) related themes.

In order to root out sheer luck and to challenge participants not only on their ability to use google we have designed the quiz in such a way that certain answers contain information hard to find online and that the number of questions should reduce the luck factor to insignificance. So the challenge is on!

2. How many soccer jerseys are sold in the 5 major European markets on an annual basis ?

3. According to Deloitte’s Money League 2012 Real Madrid has the biggest annual turnover of any club in the world. The total revenues are broken down into 3 revenue streams: broadcast, match day, and commercial. Which club has the highest commercial revenues which include sponsorships, merchandise sales etc.

4. The replica soccer jersey is by far the most important piece of fan merchandise. However, a number of other products of branded apparel are produced as well. Which club has the biggest total fan apparel sales when t-shirts, polo shirts, track tops etc. are included ?

5. The Danish national team has just renewed their technical sponsorship deal with adidas for another 2 years. But when the Danish side thrilled the world with an attacking style of play at the World Cup 1986 in Mexico which brand provided the uniforms ?

6. How many teams play in Nike jerseys in the Spanish La Primera Division for the season 2011/12.

7. Iker Casillas has played in Reebok cleats and gloves during many years but in January 2012 he changed from Reebok to which brand ?

8. A famous Italian sporting goods brand comes from the home town of Juventus and AS Torino. The city of Turin. But which one ?

9. Puma has signed a number of high profile players to wear their footwear during the season 11-12. Of the following players who does NOT wear Puma footwear ?

10. In Germany FC Bayern is by far the biggest seller of merchandise. But which 3 clubs follows Bayern in the top 4 merchandising league ?

11. At the EURO 2012 in Poland and Ukraine only 4 apparel sponsors are represented sponsoring all 16 teams. But which brand has the most teams ?

13. Nike started their venture into soccer relatively late. Only in the mid-90s it became an area of priority for the Portland based company. But which was the first major team that Nike signed up with ?

16. Puma was founded in Germany by Rudi Dasler. However, it is now owned by a company from another country. Which company ?

17. In the US Nike has just taken over the technical apparel sponship deal of the NFL from Reebok. But which company provides the uniforms for the MLS Major League soccer ?

18. Tottenham Hotspur has decided to part ways with Puma. Instead they have taking in a new sponsor from overseas. Which one ?

19. adidas was one of the first companies to start providing apparel and equipment to soccer teams. With which club of the following is adidas having the longest uninterrupted partnership ?

20. Usually the major clubs in a league are equipped by different companies. Nevertheless it happened once that all 3 major Istanbul clubs were sponsored by the same company. Which one ?

22. The fastest growing markert in Europe is Russia. But how much are the total adidas sales (approx.) in Russia ?

23. Which boot / cleat is not produced by adidas ?

24. Lionel Messi is currently the number 10 for FC Barcelona. How many different numbers has he worn with the Barca first team ?

25. When Cristiano Ronaldo arrived in Real Madrid the number 7 jersey was already taken up by club legend Raul Gonzales. Which number did he get instead ?

26.  Which Italian club has the most fans in Italy ?

27. New Brazilian star Neymar has a personal sponsorship deal with Nike. But which Nike boot (cleat) does he wear ?

28. Liverpool will change the ropes for the season 12-13 and start wearing Warrior. Bu
t which company is owner of the Warrior brand?

29. In the Real Madrid and the FC Barcelona first teams the players almost exclusively wear adidas or Nike footwear. However, one Real Madrid starter wears Umbro – who is he ?

30. When the contract of Danish national defender Agger expired he was offered how much by adidas for a new contract which he accepted ?

a. 1 million USD$ a year unconditionally

b. 100 K USD$ a year unconditionally no strings attached

c. 50 K USD $ a year if certain performance based goals were reached with regard to number of appearances and results with club and national team

The winner is the person who has the most correct answers. In case more persons have the same number of correct answers the winner(s) will be chosen through a draw.

1. Prize a club jersey + a national team jersey of your choice.

2. Prize. a club jersey of your choice.

A. The first contestant to get all 30 questions right will get a customized jersey of his / her choice.

B. There will be draw among all participants for one jersey of choice no matter how many questions answered correctly .

Leave your name and address.

The winners will be contacted by email. Make sure your inbox is operational!

The names of the winners will be published on the blog alongside the correct answers.

The Spain EURO 2012 collection consists of two kits. Home kit and away kit.

The away kit is a sky blue jersey / white shorts away game kit and a greay goalie jersey.

The jersey comes with red and yellow stripes to the collar and shoulders. The FEF crest is to the left chest and the adidas logo to the right chest.

The name and number kit corresponding to the jersey is black.

Spain away kit for the EURO 2012 jersey. Xabi Alonso is endorsing adidas and is therefore often chosen by adidas for Spain national team athlete photos.

The name and number kit is black on jersey and shorts.

Other adidas players in the Spanish national team endorsing adidas are Javi Martinez, Fernando Llorente, Xavi , and David Villa. These athlete photos are also used for promoting the official EURO 2012 match ball – Tango 12. Each player is photographed with ball in hand.

Holland back in black!

New Holland away kit launched on the 29th of February 2012. An all black affair with a bit of orange here and there.

The matching shorts are also black and with a staint of orange.

Finally the socks also come in almost all black but with a bit of orange to the center.

The new Germany away jersey from adidas has been released end of February 2012.

The jersey is green with white 3-stripes and white bands at the arm edges. Crew neck collar and the usual suspects of adidas and DFB logos to the chest.

The leading soccer team in Scandinavia FC Copenhagen have decided to switch from Kappa and to adidas.

The deal will be effective starting in July 2012 and will be valid for 4 years.

Copenhagen did play in adidas already once during the 1990s but since then adidas has been primarily been associated with the likes of Brondby in Denmark, IFK Gothenburg in Sweden, and Rosenborg in Norway.

However, the cooperation with Brondby has ended most likely due to poor results and a lot of off the pitch trouble inside the club. Since adidas is no longer spending big time on the Liverpool sponsorship it might have freed up resources for an engagement with FC Copenhagen.

The press release states that it is the biggest sponsorship in the history of adidas in Scandinavia with any football club.

The biggest allure probably comes from the fact that FC Copenhagen is well suited to secure regular participation in the biggest club tournament of them all. The UEFA Champions League. The CL is broadcoast across the globe and brings a global audience and a lot of focus on the participating clubs and of course on their apparel sponsors.

Designwise few new details are present for the home kit. Black white stripes – Nike Swoosh – Juve clublogo all familiar elements which will also be on the jersey 12/13. The current sponsor betclick might continue or not but no design major changes there either.

So what might be the driver for the Juve jersey sales 12-13 should be on-pitch result or changes to the player squad. If Juve wins the title 11-12 or atleast qualifies for Champions League football + with an invigorated balance sheet partly due to the higher stadium incomes from a new arena one cannot rule out a couple of signature signings might result. And with subsequent success on pitch at the highest club level attainable the UEFA  Champions League that might activate the dormant fanbase of Juve supporters and trigger them into buying mode. The jersey design itself will probably not be able to do the trick.

A joker might be the Italian national team and their run at the EURO 2012. A European Championship to Italy might also spur an increased in the Italian calcio.

But these are all speculations so we will have to wait and see how it all plays out over the summer . . .

The official EURO 2012 match ball has been unveiled

The official match ball for the EURO 2012 taking place this summer in Poland and the Ukraine has been unveiled.

The ball has been titled “Tango 12” and follows in the footstep of other Tango balls dating back to the first one making its debut back at the World Cup 1978 in Argentina.

The follows the pattern of the original Tango ball while at the same time it manages to incorporate the flags of Poland (red / white) and the Ukraine (blue / yellow).

The ball is FIFA approved see the mark at the top of the ball. The ball also carries the official tournament logo of the EURO 2012 and an adidas logo. Below the logo the name of the ball is written with black typography TANGO 12.

I am reviewing an extremely nice England Jersey manufactured by Umbro. It is all white with no stripes or other markings on the shirt. There are tiny red and blue crosses in a pattern around the neck and shoulder areas but otherwise it is dominated by white. The England crest sits above the wearers heart with the 3 Lions stretched across it. Above the crest in white on white is a single star for the World Cup victory in 1966. The other breast is adorned with the Umbro logo which appears out of place on such a pristine jersey. The collar is almost like a throwback to the jerseys worn by the 1966 team. Most replica jerseys have a very average collar similar to a t-shirt while this jersey has something special. If you could travel back in time, you could imagine Sir Bobby Charlton running around the pitch in this jersey. You might be distracted by his comb over hairstyle which tried to hide his bald spot but your eyes would be drawn back to this awesome jersey. It fits snug on a person used to wearing a 3XL shirt.  The listed size is 46 which would probably translate to a XL or XXL in the United States.  Though it fits snug, this is a nice Jersey with excellent construction and a clean look to it. Though England is going into Euro 2012 with a bit of controversy around the Wayne Rooney red card, you could see him or potential future England Captain Phil Jones wearing this jersey in the tournament as they try to shake off years of disappointment and win a major trophy. Regardless of whether you want to wear this jersey looking forward to the next tournament or to support the history of this great countries side which has yet failed to live up to expectations, you will look great in this jersey.