As the only side to every win three major tournaments in a row (2008, 2010, 2012), Spain, former underachievers on the international stage, are doing well to eat up every trophy that stands between them, and the end of their legendary squad.

With maestros from Barcelona, veterans from Real Madrid, and the Spanish quality present in other leagues, such as David Silva and Fernando Torres (on a good day), this national side is competitive, powerful, and in some ways, rather unique. The possession play of Spain, as seen in Barcelona, is dominating, calculating, and ruthless. It has seen the ends of teams like Germany, the Netherlands, and Italy, huge teams that need only show you their trophy rooms to reveal their knack for international competition.

To represent this once-in-a-lifetime squad, Adidas has been careful to continue Spain’s jersey history: Red shirts, blue shorts. Spain has spent many, many years in the typical red and blue kit, and to keep the image that has always been there, but is now applauded, Adidas keeps producing some top-quality Spanish jerseys with the same deep red that has always been present with Spain in international competition.

As I review Spain’s 2012 home jersey, as seen in EURO 2012 and the pre/post tournament friendlies and qualifiers, I will be bringing a new review method to the table. Though I will be looking at the same aspects, Look, Fit, and Customization, I will be splitting each segment into two parts: Ready-to-Wear, and Custom. Like this, I’ll be able to look at the features of the jersey specific to each side, be it an off-the-rack, standard jersey, or a customized one. Here we go!

This Spanish jersey, like many in the past, sports Spain’s deep red paint, as seen on the Spanish flag. On the international stage, few teams are as famous in red as Spain is now. It is a powerful and in some cases, intimidating color, yet a team that represents a slower, more controlled play, with a focus on finesse rather than physical battles, wears it. Adidas and Spain have toyed around with what to put on the shirt, other than just red, and have learned that when it comes to the tournaments, plain red, with some details, is the way to go. Adidas has produced some nice side jerseys for the other competitions and friendlies between competitions, but when it comes to playing for a trophy, you can bet Spain will be at their best in their best with red. 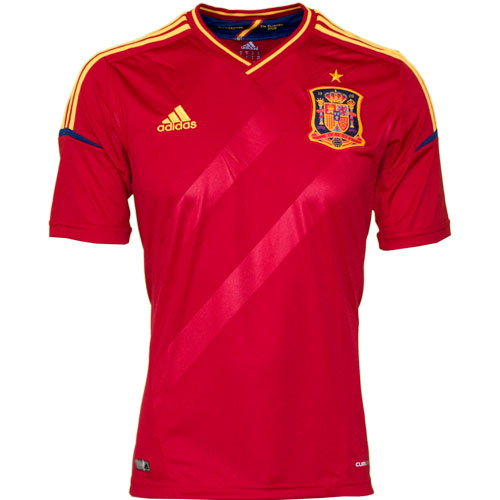 The jersey, bathed in that red, has a couple of diagonal, glossy strips on the front, part of a design that Adidas has been playing around with lately. It adds some cool décor to the front of an otherwise solid colored front, and the visibility of said stripes is subject to the lighting. It is a nice effect that adds some attention to the front of the jersey.

The use of Spain’s yellow from the national colors is apparent, as usual, in the signature Adidas shoulder stripes as well as the Adidas logo itself. On the sleeves, a blue swish of the shade seen on Spain’s shorts and their emblem marks the end of the shoulder stripes. On the neck, a kimono-style design with a yellow centerline adorns the jersey. The look, seen in many of Adidas’ 2012 jerseys, is a nice, Asian styled touch. The inside of the neck are is also lined with a thin yellow line, and on the back of the inner-neck area, a blue rectangular patch reads “Campeones De Europa 1964 2008”, Champions of Europe 1964 and 2008. I guess they can add EURO 2012 to that list now!

Finally, on the top of the back of the shirt, another blue patch reads “Real Federación Española de Fútbol”, Royal Spanish Football Federation, the authority of football in Spain. The use of these blue patches with text are a clever incorporation of Spain’s other favorite color in the jerseys. I like them a lot and I think they bring more out then just two-tone of red and yellow.

Spain’s new jersey is smooth and casual with a rich red coat. The jersey goes great with many different pieces of apparel because of its primarily solid design. The national crest and Adidas logo do a lot to sport the brand image and show the quality of the design. I think it is a great national jersey and the strong use of red accented with yellow just yells “summer” to me.

With a custom name and number as well as some of the finer details, such as tournament patches, match details, and maybe even an authentic edition, this jersey is among the most complete of Adidas’ most recent offerings. You can make the look unique with your choice of player details in the back, or maybe even your own. The authentic version of the shirt uses Adidas’ techfit line of fabric technology and it looks very professional and very athletic.

Like most Adidas’ shirts, this jersey is a real work of quality and years of experience. In vertical order, here is a look at this shirt’s fit.

The neck area or collar of the jersey is comfortable, and I am glad that Adidas’ has opted to go with this design rather than a large, unnecessary collar. The material with which it is produced is elastic and stretchy, making movement of the head and neck easy and intuitive. It is good for watching, it is good for playing, and it is good!

The sleeves are nice and loose, as is the lower-torso of the shirt. I prefer this kind of style where the upper-torso/shoulder area is tighter and then the rest of the jersey flows off that hold. It is nice and comfortable, thinner than many jerseys, such as Adidas’ 2010 lineup, but not quite so much.

The fabric is neat and soft. Details such as the diagonal strips on the front of the jersey are unfelt when wearing and the Adidas logo is neatly embroidered. Overall, it is a nice and comfortable shirt that is great for any use!

The standard sizes of Adidas are all appropriate and generally run close to their expected sizes, though on occasion they may be a little larger than expected. I received a shirt in US size Large, though I tend to get them large rather than medium because I like the general looseness of a jersey. It is consistent with my other Adidas shirts of the same size and it is perfect for casual or athletic use. No part of the jersey feels wrong; Adidas did a great job, as is typically the case.

Following the traditional scheme of Spain’s kits, Adidas cannot really go wrong here, and they have not. Proudly, Spain plays a possessive, beautiful game of football, and to show the origins of that style, they wear the same shirts they have worn for years and years. The red top with blue shorts has been with Spain for decades, and with the EURO 2008, 2010 WC, and now EURO 2012 trophies in their hands, it is easy to see why Spain does not play with the design much. Maybe it is luck, maybe it is tradition… Either way, Adidas has made a cool jersey with a great use of Spain’s signature red/yellow colors with a hint of their national use of blue. The design is clean, the new collar area is effective both visually and physically, as well as the shiny diagonal strips on the front of the jersey. With customization, you have a complete jersey with which to represent what is perhaps one of the greatest sides in footballing history. I give Spain’s EURO 2012 jersey a nine out of ten (9/10). Where did that one point go? Maybe just lost for a lack of creativity, but it is not as if Spain is going to be changing their victorious color scheme any time soon!