There are a few things that you can expect from most Portuguese people: loud and exuberant behavior, the smell of wine and codfish on their breath, hair (just Google “Bosingwa” to see what I mean), fervent piety, general nostalgia (especially when it comes to music), love of family, knowledge of how to tend to a garden but not how to write an email, but most importantly, undying passion for the Seleção. So, it is with great pleasure that I, a Portuguese, have the privilege of writing this review.

A brief modern overview of the Portuguese national team really comeS down to failed expectations… The Seleção have qualified for every Euro and World Cup since 2000, which comprises 6 tournaments, and have placed in the top four of 4 of them. Portugal has yet to win a trophy, even though in that span we saw the emergence of the Portuguese golden generation in Euro 2000 and their disaster showing at the 2002 World Cup (having lost to the USA and co-hosts South Korea in the group stage), the hugely entertaining Euro 2004 hosted by Portugal which took us to the final only to lose  to dark horses Greece, a fourth place finish at the 2006 World Cup, and two knockouts at the hands of Spain in the 2010 World Cup and in the semi finals of Euro 2012 (on a penalty shootout). This 12 year period has brought some of the greatest Portuguese players ever to play the game, including Luis Figo and current savior Cristiano Ronaldo, but after 2002 the team as a whole hasn’t been world class, which may be why our trophy cabinet is still empty.

Nevertheless, the Portuguese love the national team as it is a source of national pride and one of the most recognizable symbols of their country around the world today.

The home shirt debuted at Euro 2012 is of a simplistic design, which I prefer, but fundamental changes to its makeup make it one of my favorites ever. 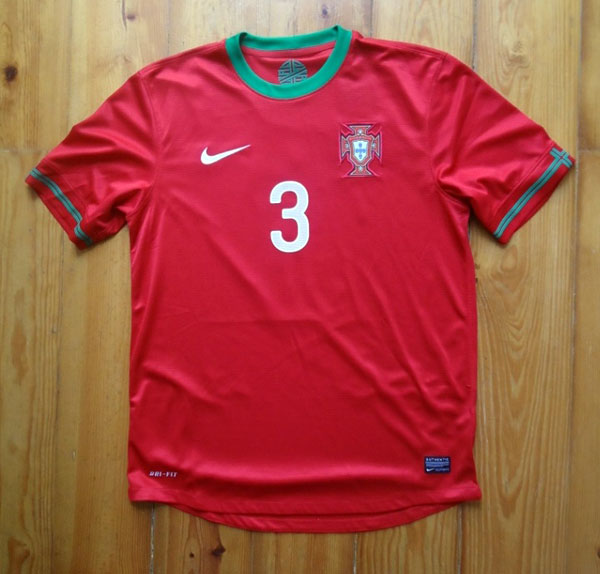 Portugal’s 2012-13 home shirt uses a glowing crimson base that I much prefer to some of the brighter reds which we have seen in recent years. My favorite color scheme to this day is still what was used at the 2006 World Cup, a maroon/wine color. The ever present green accents this year show on the collar and elevated material on the sleeves.

The Nike shirt is a crew neck model, and the material is the new Nike dri-fit fabric, which is a huge upgrade from the past and is relatively comfortable to wear (although, as mention in previous reviews, still not as comfortable as Adidas or Umbro).

My only qualm with this shirt is the badge, which Nike totally %@+&$#’d up. Of course, the crest is beautiful, and the material used to make it is nice, but the border is absolutely atrocious. I think this is the first time I have ever made this comment on any shirt, so I really have to question Nike as to how they could screw it up this bad. The border is too thick, the color does not match and is even off-putting to the jersey as a whole… such a shame. 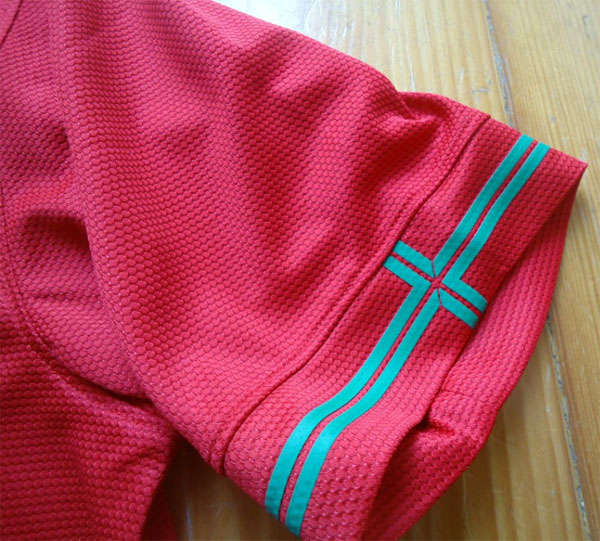 The aforementioned sleeve accents have the same design as the front of the away shirt. 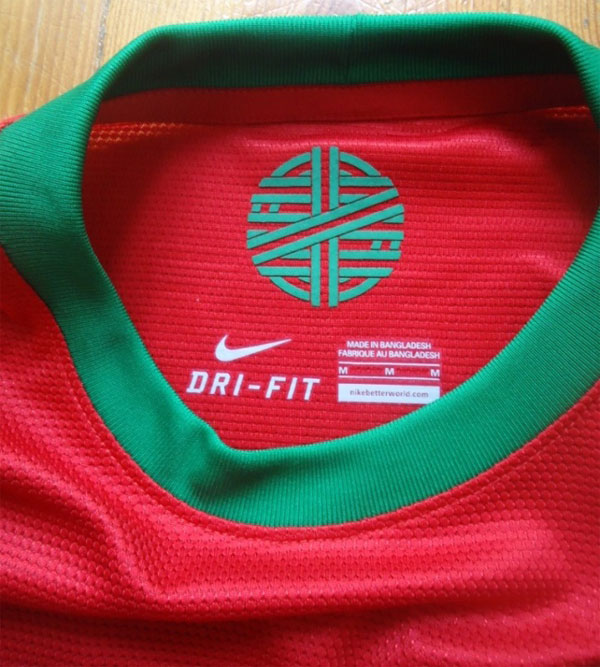 Many have asked what the above symbol is, which you will find just above the back neck size and “made in” details.  This represents an armillary sphere, a tool used by navigators of old to guide them and also a symbol of Portugal’s historical dominance of the sea. Magellan and Vasco de Gama are some of Portugal’s most famous navigators. 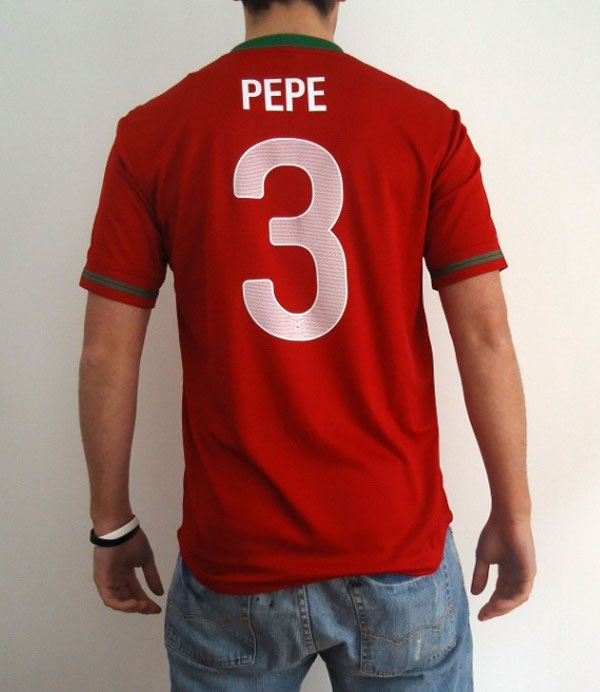 The printing is just as simplistic as the shirt, which is a huge plus. We have seen the perforated numbers on Nike shirts since 2010 and as the old adage goes, “don’t fix it if it isn’t broken”. Perhaps the letters could us a little more flavor, but I much prefer this to Puma’s font, for example. 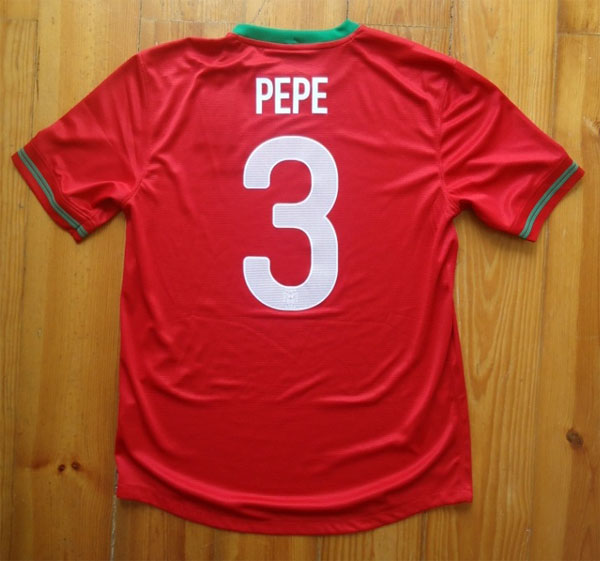 Now the question you’ve all been waiting for me to answer: why would I get a Pepe shirt?? Well, aside from the fact that I already have 8 Ronaldo shirts from various years/teams (since he’s been the only Portugal player to really stand out recently), Pepe had an immense 2011-12 season with Real Madrid. Furthermore, in my eyes, he was our next most important player at Euro 2012 after Cristiano, and one of the best defenders at the tournament (he made the official Team of the Tournament, along with Cristiano and Fábio Coentrão). Sure, he has his crazy side, but I have no reservations in saying he is definitely one of the best defenders in the world at the moment. Check out some his highlights from the 2011-12 season here: 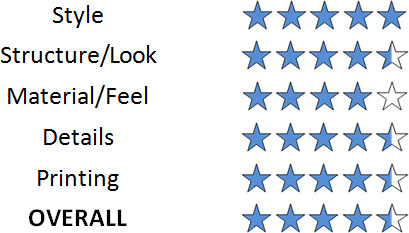 A beautifully simple and vibrant shirt, I am sure this will remain as one of my favorite Portugal shirts for years to come. 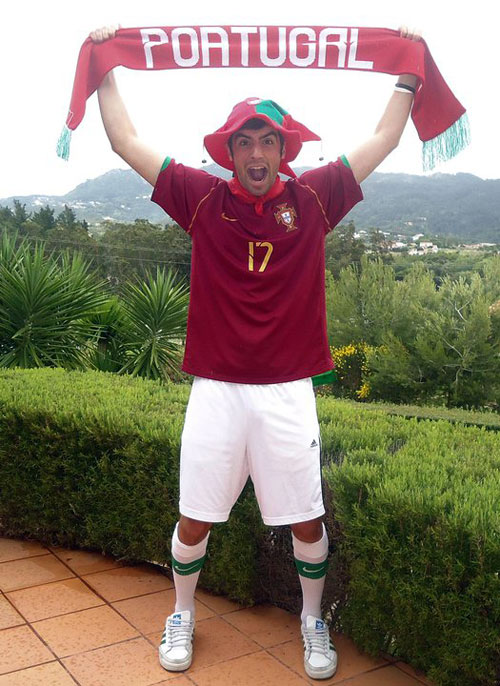