Juve are back, and boy are they doing it in style! Some masterful transfer dealings after the 2010-11 season, where they finished 7th in Serie A, have really reignited the fire for which Juventus have historically been known. Key signings before the 2011-12 season included Arturo Vidal, whose €10.5 million price tag proved costly but has been well worth it, Mirko Vučinić who tied for the club’s top scorer statistic during 2011-12 (even though perhaps he didn’t totally merit the €15 million fee), and Andrea Pirlo who was an absolute steal for free from Milan strengthened the midfield immeasurably. Marchisio also really came into his own and began to live up to his hype of being a future Italian superstar. Juve won Serie A by a mere 4 points, but really announced themselves to the world as a force to watch. Before this season, they further strengthened their squad by adding former players Sebastian Giovinco and Martín Cáceras, as well as Udinese duo Mauricio Isla and Kwandwo Asamoah. This season has started quite well for La Vecchia Signora, so much so that some claim they have the best midfield in Europe! (a claim this author would vehemently contest, but I digress…)

While the Juve shirt does not traditionally have much to work with, they created a top class kit for the away shirt with some great minimalist details. 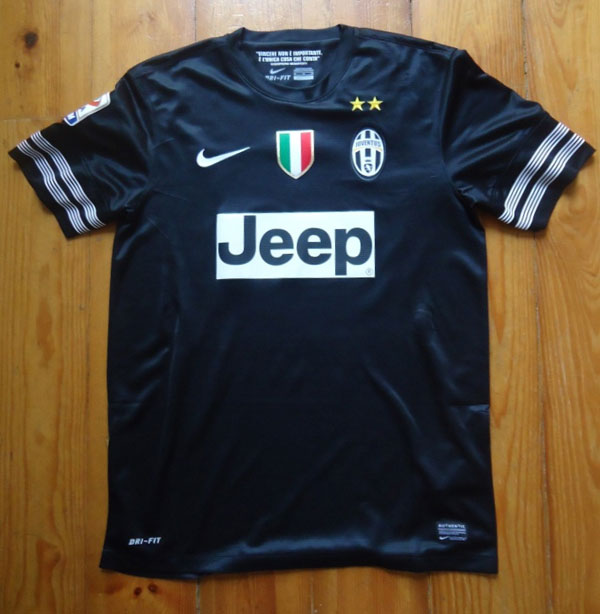 Juventus’ 2012-13 away shirt uses a simplistic yet vibrant black base which really helps to accent the few extra features on the shirt. The most noticeable detail on the shirt are the two rings around the arm holes, which are actually two sets of three thin lines made of raised rubber material… looks and feels great. The shirt is made by Nike and is the traditional t-shirt crew neck model, can’t go wrong! While the material feel isn’t the greatest, as with all Nike shirts, there’s not much you can do so you have to roll with it.

An interesting point to note is the two stars above the shirt. Because of the Calciopoli scandal some years ago, the number of titles which Juventus has actually won is disputed depending on with whom you speak. Juventus claim they have won thirty titles, while the FIGC (Italian Football Federation) will say they have won 28. The Turin club stirred up controversy this year by initially adding three stars above the crest and text under it saying “30 Sul Campo” (“30 on the Field”). While Juve only wear two stars during the match, you can customize the shirt with or without the contentious accessories. 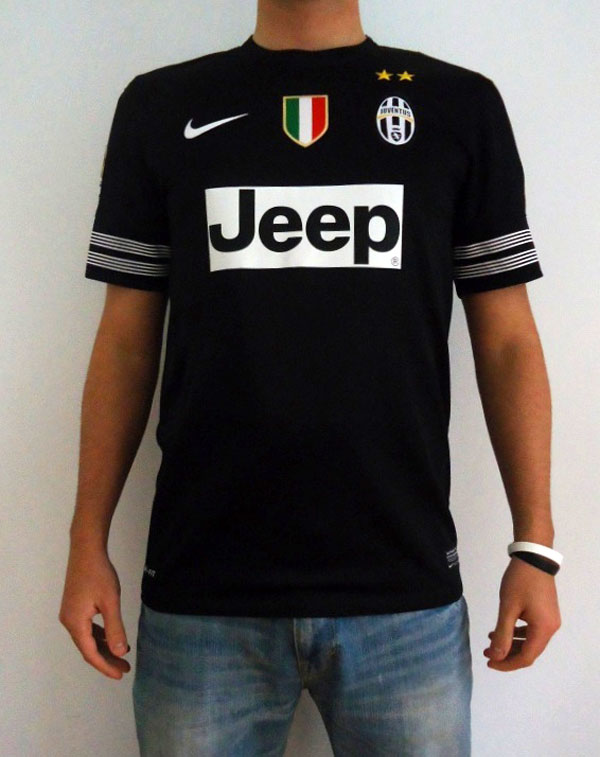 Jeep is the new sponsor featured on the shirt, a company which was recently acquired by the American-Italian Chrysler-Fiat partnership (go figure with the Italians…). The simple Jeep logo fits well with the modest design of the shirt. As to materials, if last year Juventus got it all wrong, then this year they got it all right! Last year’s sponsor, which can be seen in the first picture above, looked like a sticker that was slapped on the shirt and could peel off at any time. This year’s sponsor, seen in the next picture, has been deeply printed onto the shirt, almost like a plastic name and number that would go on the back. If you look closely you can see the ridges of the shirt material on the white background of the sponsor. It doesn’t look like it will go anywhere or wear out anytime soon. 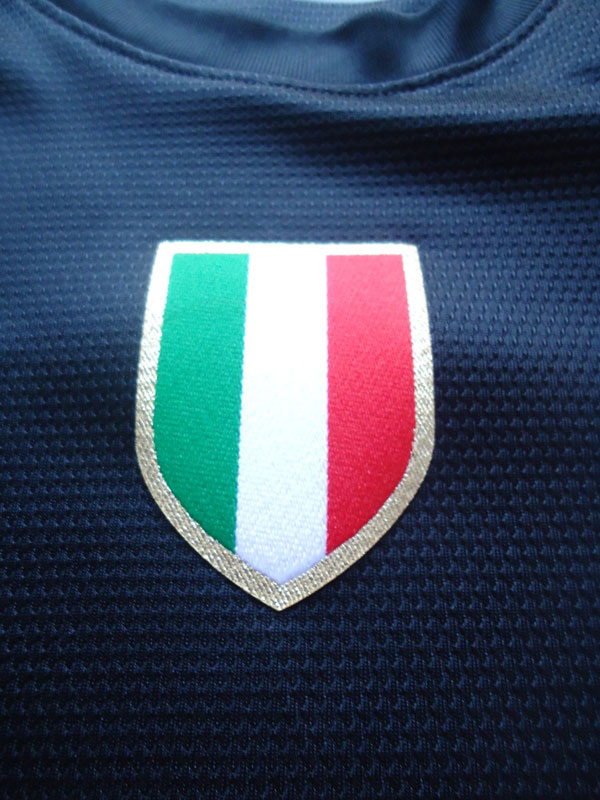 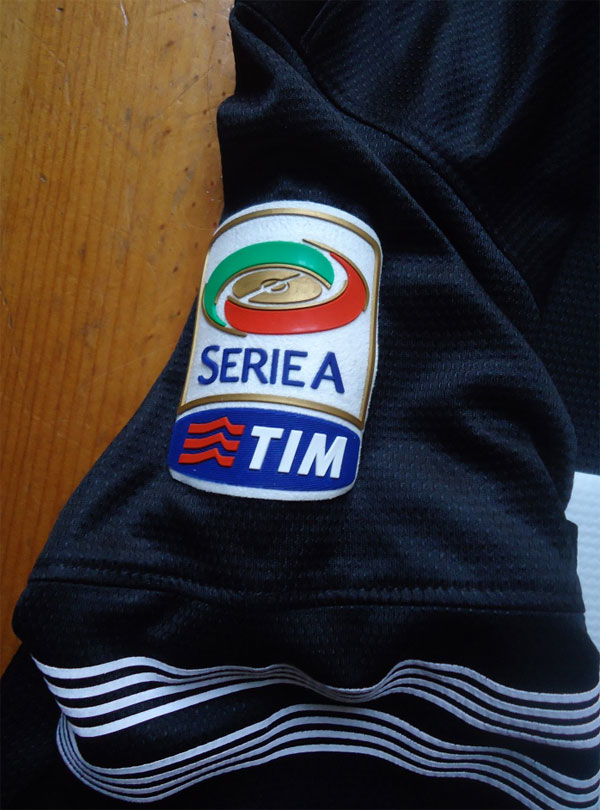 For winning the league, Juve are honored with the Scudetto patch worn in the middle of the chest. The new design, first implemented last year to Milan’s shirts, looks quite nice with the shiny gold outline.

The Serie A patch is the same it has been for the past couple of years, combining a rubber material on the raised parts with Lextra-type material white base which looks great.

The club crest is also spot on, embroidered on the shirt with great stitching on the patch itself. The stars are also embroidered into the shirt. 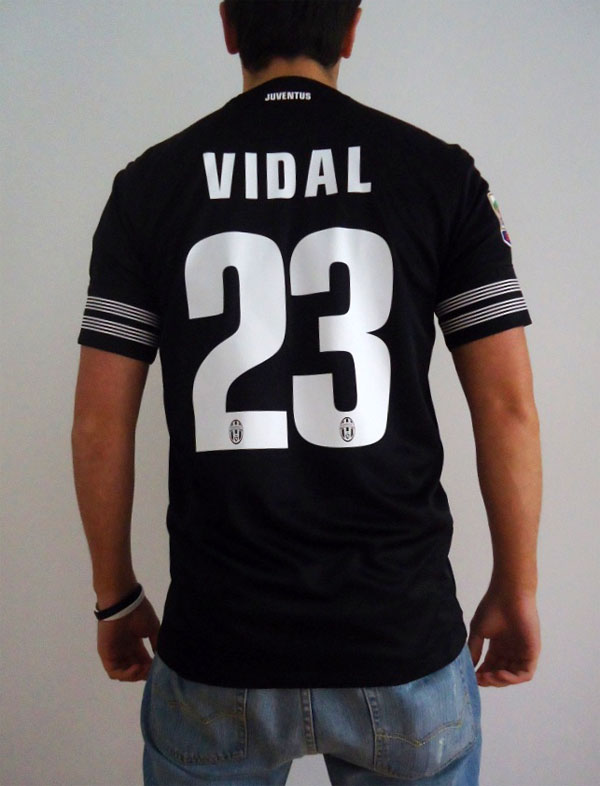 Again, Juventus got the printing on their shirts right this year with BIG letters and numbers and a simple font. The characters are all white with no border and the numbers feature the club crest centered on the bottom. 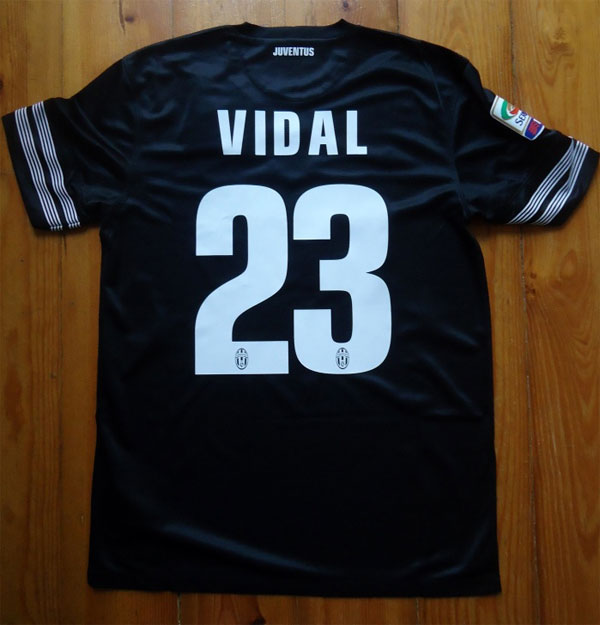 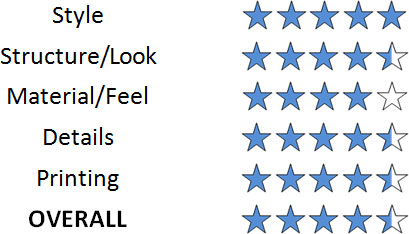 This shirt is another of my favorites from this season, along with my recently reviewed Man City home shirt… the difference is this one, as opposed to City’s, is not so much for the feel, but more for the style. Nike really should do something to change what they put in their shirts to compete with the ever more comfortable Adidas and Umbro shirts. They made alterations for the Euro 2012 country shirts, which were much welcomed by this author, but they still have a way to go!