The keyword to watch in the headline is TEAMS because this ranking is about the teams on the field and not the institutional framework of the club. Real Madrid is the most winning club in European football. But the club has won a number of titles during the 1950s and as well during 2010s meaning that nobody involved with the club in the 1950s would have been there 60 years later. So by club team what I refer to is group of players who play together during a certain period of time. Could be 5 years , could be 10 years – but rarely longer than that since in order to be able to qualify for the definition there has to be continuity. Certain players, managers, coaches have to be the same throughout the entire timespan. 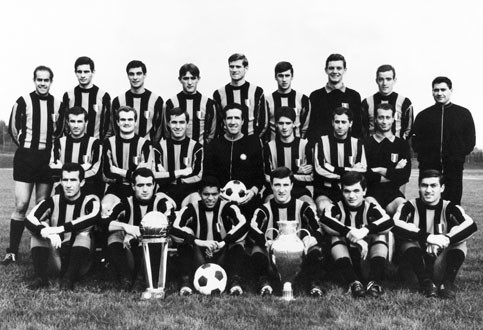 So what defines a great team ? Well, a number of factors can be said to define it but definitely more than just one. The most obvious criteria would be winning titles. In order to be truly great you will have to win. A second criteria would be individual excellency. It would be the rare case where a very successful team would consist of a homogeneous group of slightly above average players. Thirdly, a specific tactical underpinning or way of play , maybe a novel invention tactically will also be a defining characteristic. And finally a manager or a coach with a unique personality often gets to symbolize the team itself.
So here we go. It is hard to compare the teams over time since the game has changed dramatically over time. It is easier to try to find one of two teams which have defined football throughout a decade or maybe a slightly shorter period of time.
Disclaimer. The focus is very Eurocentric. Though probably certain Argentinian and Brazilian club teams would deserve being mentioned.
The first team which spring to mind must be the Real Madrid team winning 5 European Cups in a row from 1955 and until 1960.
During the 1960s Inter became successful with the strong defensive mastery called catenaccio. This very defensive oriented football is still the cornerstone for most Italian clubs.
Just like the Dutch national team made a push during the 1970s so did Ajax with their total football. But they were not the only ones to be inventive during the 70s. FC Bayern developed a new defensive formation with Beckenbauer as sweeper playing behind the center halfs. A strong axis with Meier, Beckenbauer, Breitner, Müller. Often this what you see that a dominant club team also makes up the basic foundation of the national team. The Bayern team winning in Europe in 2012 with Neuer, Lahm, Schweinsteiger, Müller also went on to win the World Cup in 2014.
Liverpool become the dominant team end of the 70s and until the Heysel disaster. Then AC Milan takes the throne of Europe with back to back titles in 89 and 90. The master tactician behind the team is Arrigo Sacchi. The money man making it possible in the first place is Silvio Berlusconi. The player axis being the foundation is made up of Baresi, Rijkaart, Van Basten, Gullit. At the same the team under Maradona in Napoli wins a league title to the south of Italy for the first time ever, as well as a European title.
Around the same time Johan Cruyff now no longer the player but the manager what is known as the Dreamteam in FC Barcelona. The second incarnation of this magnificient machine is team under Rijkaard and later Guardiola winning 3 UCL titles. Players like Puyol, Xavi, Ronaldinho and Messi being the framework to carry out the orders on the battle field.
Manchester United under Sir Alex Ferguson can also be said to be the proponent for particular style of football, and group of players being together for an extended period of time. Everything comes crashing down after 2013 though.
Real Madrid takes to the top of Europe for a second time during the period 2013-2018 being the dominant team in Europe.
So the final lists looks like this:
1950s: Real Madrid
1960s: Inter Milan
1970s: Ajax and FC Bayern München
1980s: Liverpool and AC Milan
1990s: FC Barcelona
2000s: FC Barcelona and Manchester United
2010s: Real Madrid
Honorably mention: SSC Napoli, Chelsea FC, Juventus