At the World Cup 1958 in Sweden Brazil ended up facing Sweden in the final. Both Sweden and Brazil have a yellow home jersey. Thus one of them would have to use their alternate kit. In this case it was Brazil which would the wear kit consisting of: blue jersey, white shorts, blue or white socks. 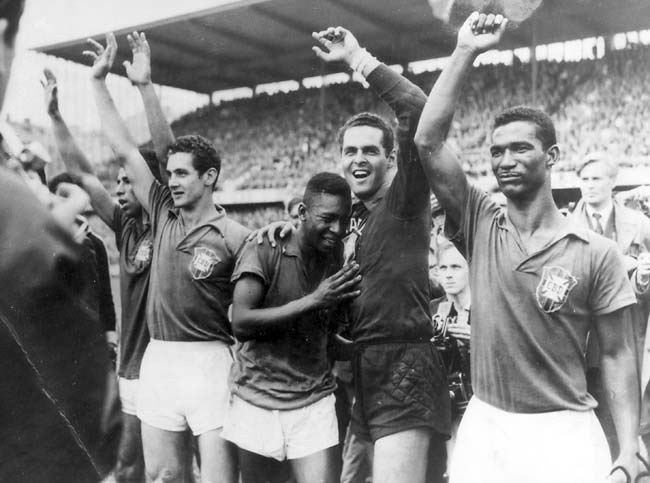 At this point in time no name was worn to the back of the jerseys. No front number for that matter either. Only back number. Pele wore the number 10 and got his breakthrough at the age of only 17 years.

The Swedish national team has never managed to repeat the feat again of reaching the World Cup final. The closest Sweden ever got was at the World Cup 1994 in the US where they reached the semi-finals.
The most beloved national team in Sweden is probably the hockey team Tre Kroner. Football might be the most popular sport overall but hockey is a close second while in most European countries there is no second after football.
Brazil is the only team from outside Europe which has won a World Cup in Europe. And until 2010 the only team which had won a World Cup outside of own continent. So not only has Brazil won the most World Cups of all, 5, but they have also won it the right way. By playing the Jogo Bonito as well as winning under very diverse circumstances.
Vamos Brasillllllllllllllllllllll