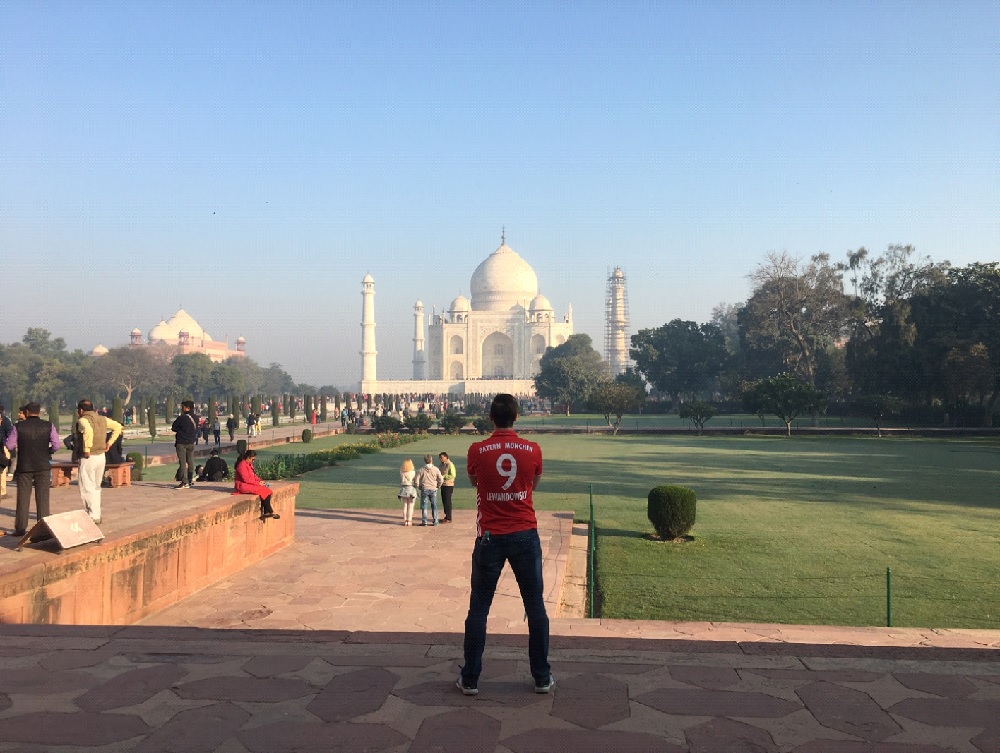 The 2016-17 season was not the one Bayern hoped to have on the pitch. Disappointing runs in the domestic cup (semifinal exit) and Champions League (quarterfinal exit) were calmed by the team’s ability to retain the domestic league trophy, marking their 5th league title in a row. The kings of the Bundesliga brought in two marquee signings in boy-come-home Matts Hummels and Euro 2016 wonderkid Renato Sanches, but the team as a whole simply wasn’t able to raise their game as a collective. Impressive stats in the league (82 points, +67 GD overall, +15 points from 2nd place) were met with strong opposition in the domestic cup and Champions League, losing to rivals Borussia Dortmund and Real Madrid in each respectively. The team continues to enjoy a plethora of experienced and young talent, with exciting new signings already lined up for the season to come, and Bayern will no doubt continue to be a force to be reckoned with for years to come.
It’s important to note this season past will mark the end of two legendary footballers on Bayern’s books, as club icon Philipp Lahm and midfield engine Xabi Alonso have hung up their boots. Auf Wiedersehen, Philipp! Adiós Xabi!
While the tally at season end probably did not meet the squad ambition, they sure looked good in their home strip. Bright, sleek, and emblematic, Bayern’s home jersey is everything a fan should want from their team to “show their colors”, and to keep in their own wardrobes! 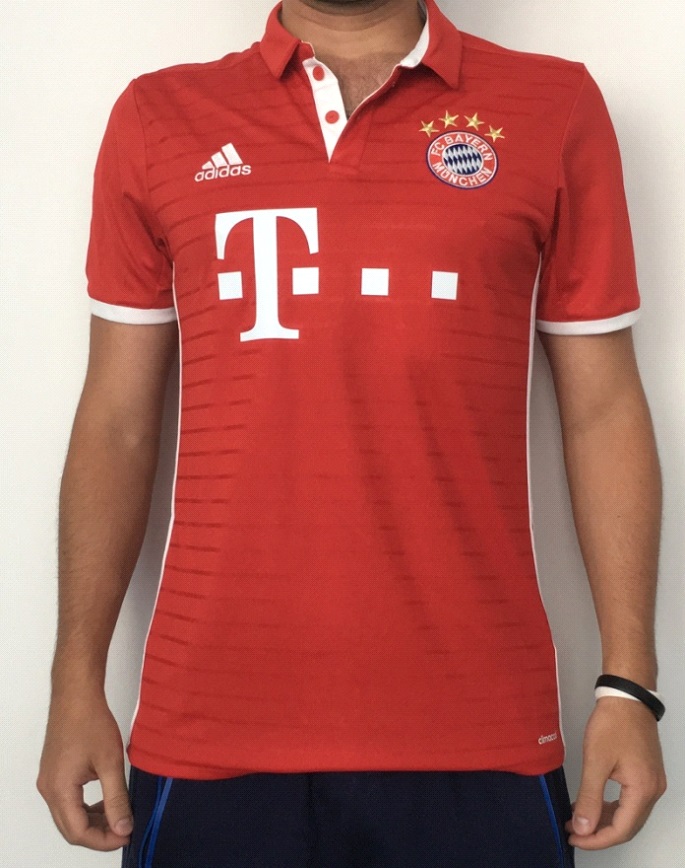 Bayern Munich’s 2016-17 home shirt is based in bright red with white and deeper red accents. The shirt is made of Adidas climacool material, which is my personal favorite among the three major shirt manufacturers, and is comfortable and stylish both on the pitch and around the town. 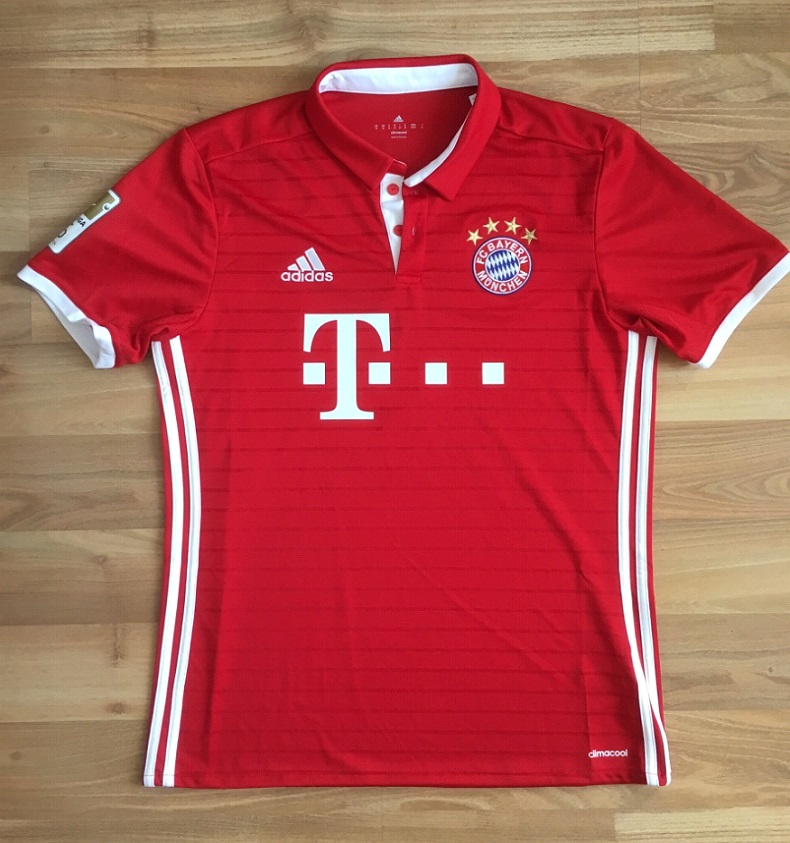 One of my favorite things about this shirt, which Adidas has started doing in recent years, is making the shirt contoured around the waist. It’s not meant to be form fitting, so it won’t hug your curves, but it helps to create a more modern style. This looks especially cool with the Adidas stripes running down the sides, which make the contour even more pronounced.

The neck is fashioned with a mini collar, opening to the front with two buttons. I should mention that the collar is very rigid, and as long as I’ve worn it the collar has never flipped out of its natural standing position. The inside lining of the neck and the material of the buttons are trimmed in white.

The club phrase, “Mia san mia” (“We are who we are.”) is stylized prominently on the back of the collar. 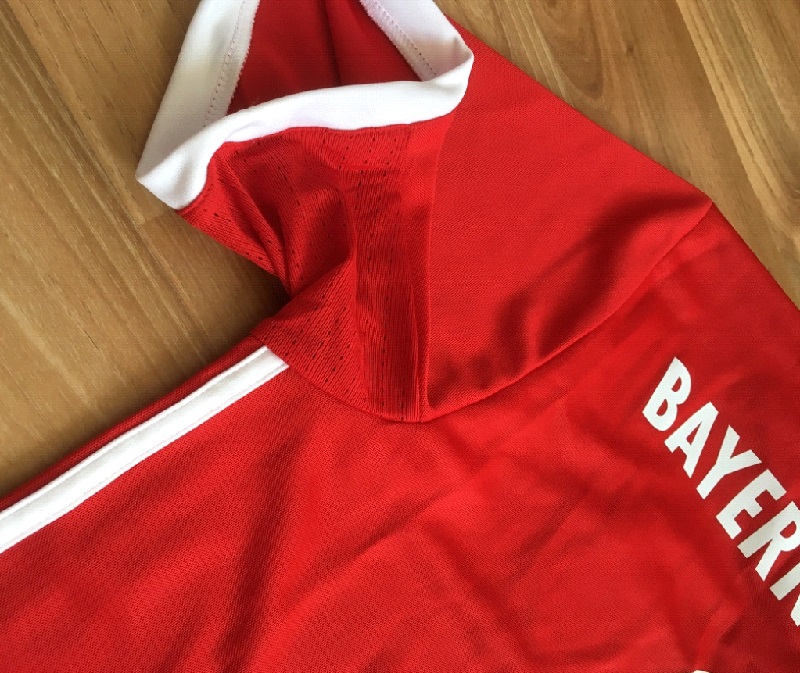 The sleeves are cuffed in white and contain vents on the underarm to make the shirt more breathable. The horizontal lines running on the main shirt panel do not appear on the shoulder/sleeve material. 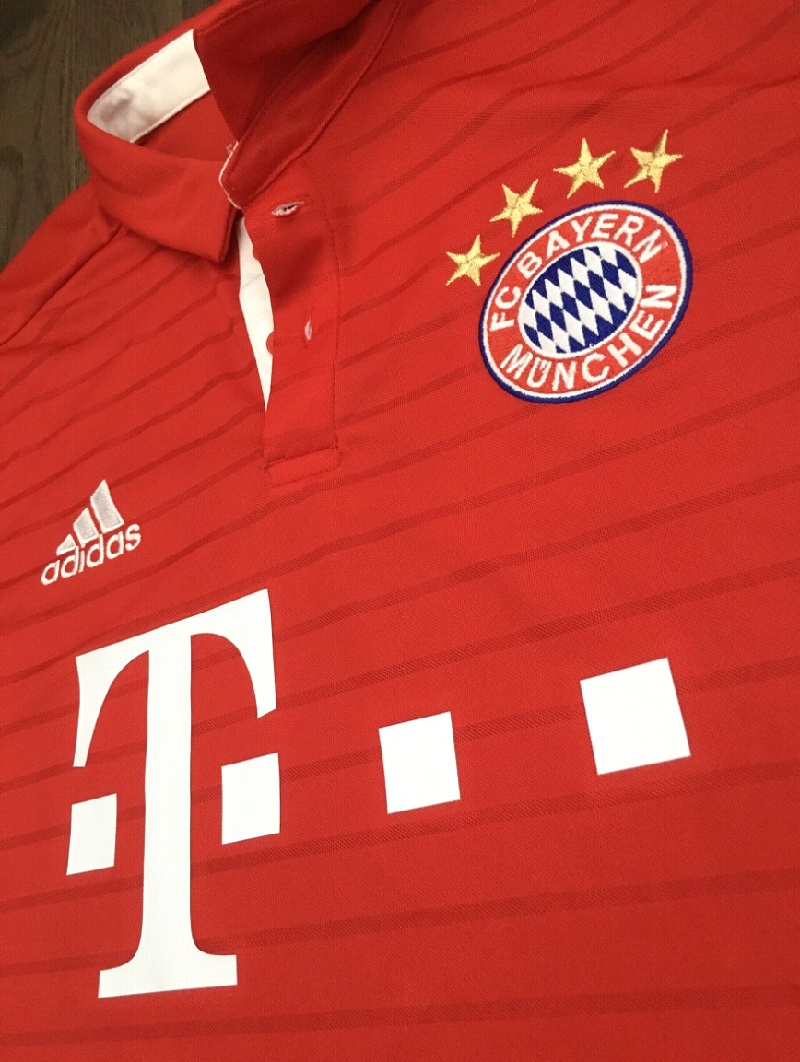 Although hard to see at a distance, the red main front panel has small, deeper red horizontal lines running across the body. Aside from adding a degree of depth and design, this feature doesn’t add or detract much from the shirt.
The club sponsor, T-Mobile, has maintained the same style of logo on the front of Bayern’s home shirt since 2010. The material is the same as the shirt print and is plain white. The club badge is sewn in, which is my personal favorite method of application. 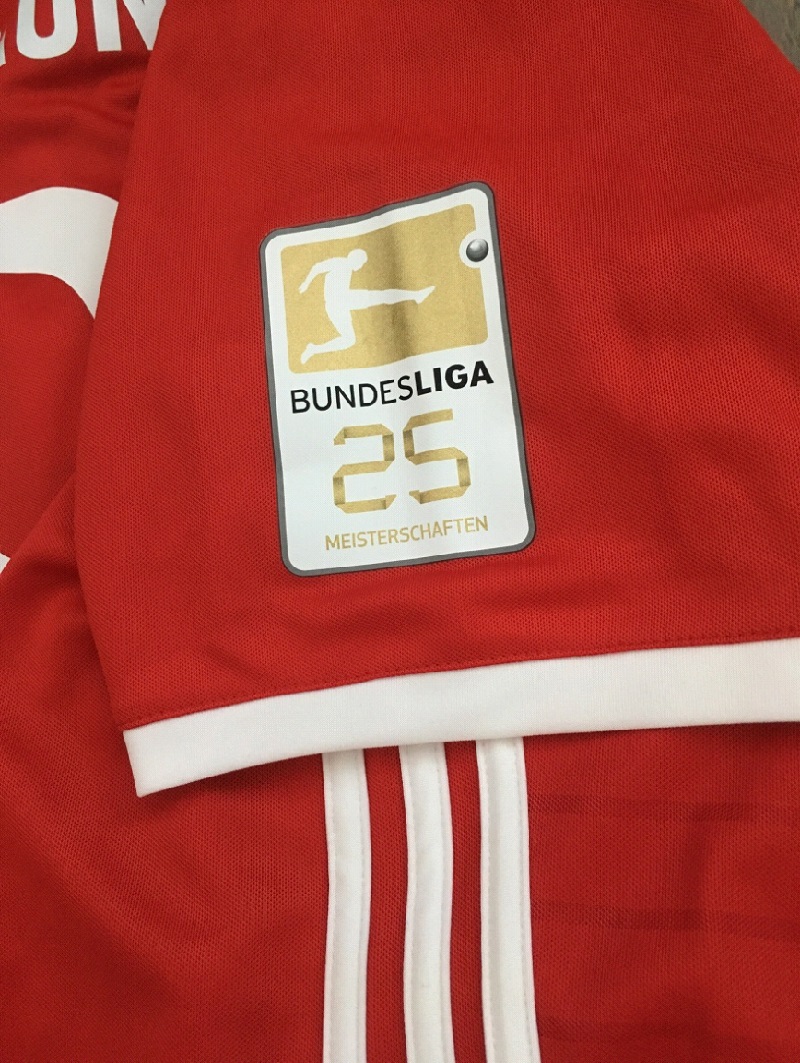 This is in stark contrast to the league badge on the sleeve, which has a great design but is a flat patch. I much preferred league patches of years past (see some of my other Bundesliga team reviews), which were 3D and made of a felt material.
The Print 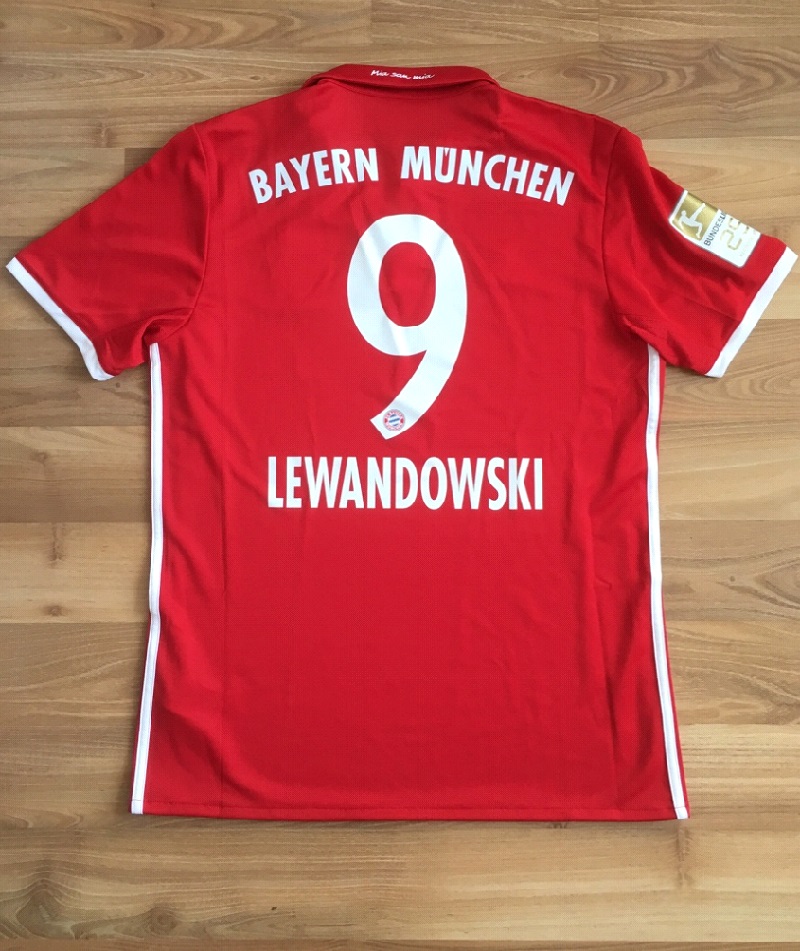 Bayern’s print is simple enough: a plain and simple font with solid white color. I do like that the club crest on the number is colored in. 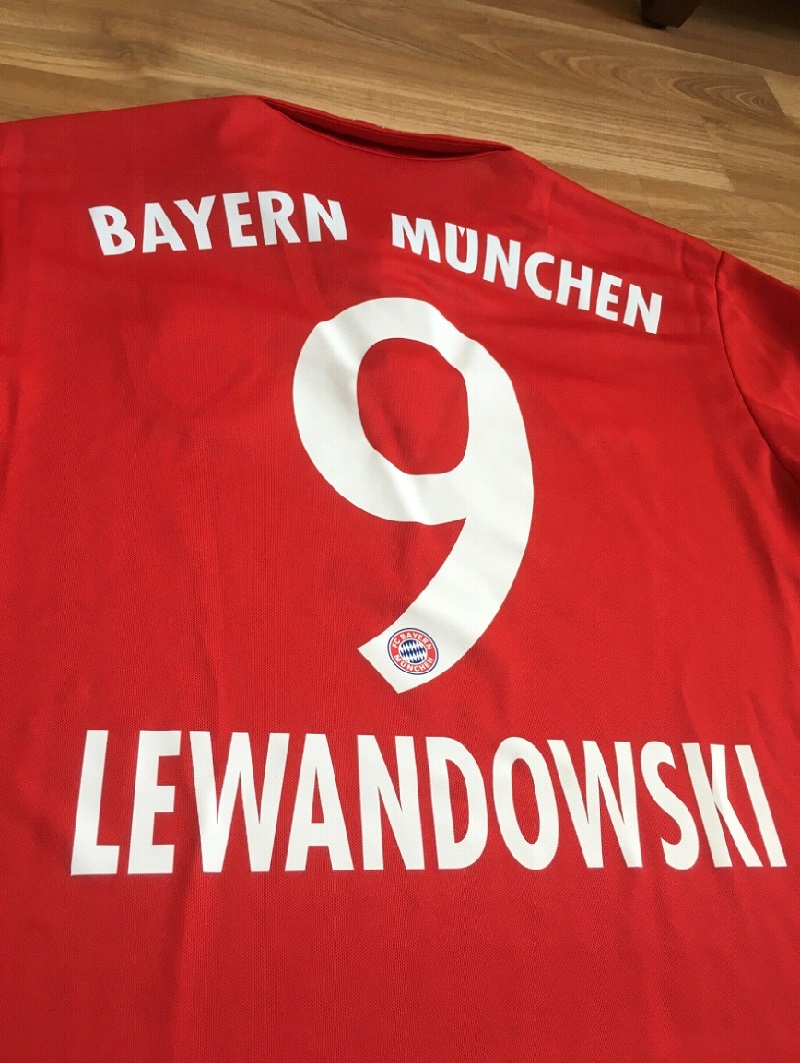 It follows their traditional style of printing the player name below the number, something the club has done for many years. All shirts (even those without a player printed) contain the clubs name as written in German “Bayern München”, on the back of the shirt right above the shoulder blades.
Conclusion

Adidas opted for a shirt that is easy to like, with its minimal design and plain printing, but it really does look good. In my view, this is their best home shirt since the 2012, which was similar in design except it opted for gold trim instead of white and had no collar.
As always, the official kit and printing are available to purchase from iDfootballdesk.