Manchester City will play in a new away kit next season paying homage to their rich history and the club’s founding fathers.

The new City away jersey has a subtle half and half design, which represents Ardwick AFC who played in the same design during the 1890-91 season. The halves of the jersey are in dark charcoal and black representing Gorton AFC who played in a black shirt, the first ever recorded kit of what would become Manchester City in 1884.

The jersey features a grandfather collar, a long placket and a stand at the back.

The Manchester City crest, the Nike swoosh and sponsor’s logo are all in gold to represent the club’s recent success in modern times. 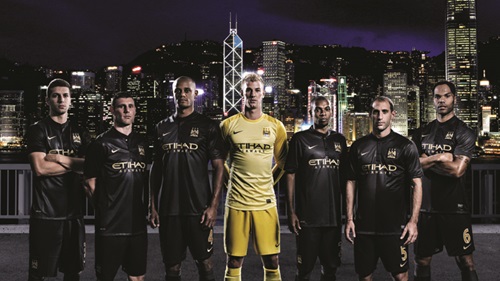 – The fabric uses Nike Dri-FIT technology to draw sweat away from the body through the fabric where it can evaporate, to keep players cool and dry.

– Ventilation zones under the arms on both sides, as well as at the shorts waistband, to allow additional comfort and cooling. A mesh panel across the entire back increases air circulation.

As can be spotted from the shorts the Man City printing for the away kit 13/14 will be the gold / white Premier League style.

Both for the jersey and for the shorts.