For the season 2013/14 Atl. Mad. has launched a new home and away jersey + a new name kit for the home as well as for the away jersey. 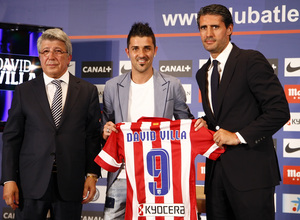 The great hope for Atleti is their new striker David Villa. David Villa was a great striker for Valencia and has delivered for the Spanish national team though often playing in an somewhat ackward role out on the left wing. In FC Barcelona he clearly suffered in their system but still delivered a decent amount of goals and assists. In Atletico DV will get back to playing the role he does the best. The number 9 being the classical striker hoovering in front of the opponent’s goal.

The name and number kit for the season 13/14 is blue with a white outline. The numbers have a club logo at the bottom.