When sportswear suppliers design new home shirts for big clubs, it usually is a very restricted task. We know that a Real Madrid home shirt is going to be plain white every time, a Celtic home shirt will have green and white hoops, Juventus will have black and white stripes and so on. Big clubs have such a long history that you can’t really go and make big changes to home shirt designs anymore. It’s usually the away shirt designs that designers can really play with. That’s why those little design features that make the differences between different seasons’ home shirts are so important. That’s where this season’s Juventus home shirt really delivers. 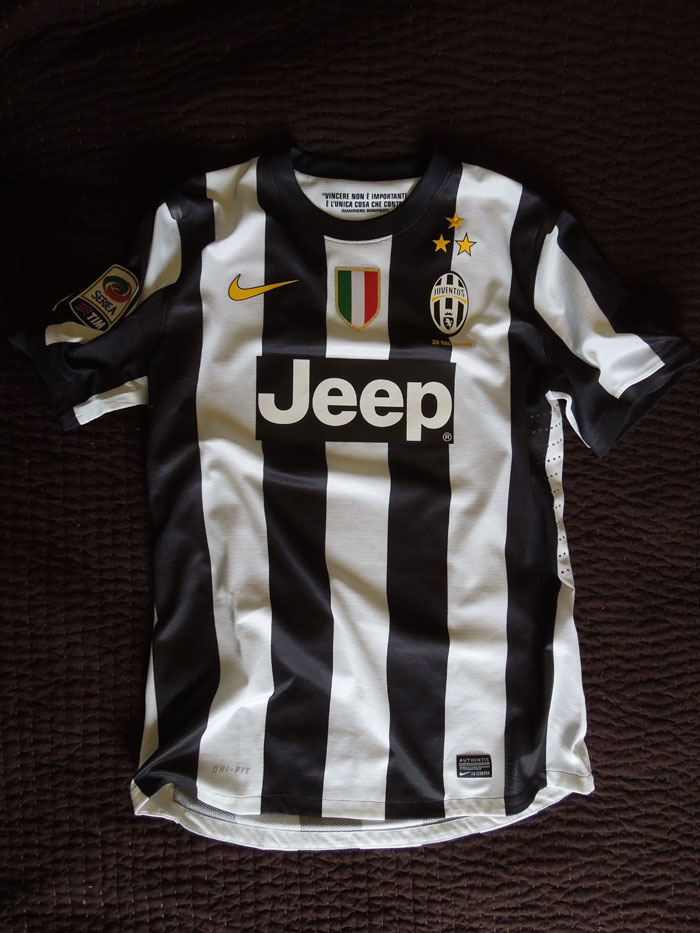 This seasons Juventus home shirt has very simple and classic design. Gone are the “buzz” stripes from last season, this time the stripes are clean cut and have normal width. The back of the shirt features a square shaped black space for numbers and a horizontal space for name. This is a bit risky design with football shirts since the shirt can then look slightly empty and tacky when worn without a name and number. However, Nike has managed to sort of blend the number and name spaces with the rest of the shirt’s design. They are very much part of this design and that’s why the shirt looks good even without a name and number. 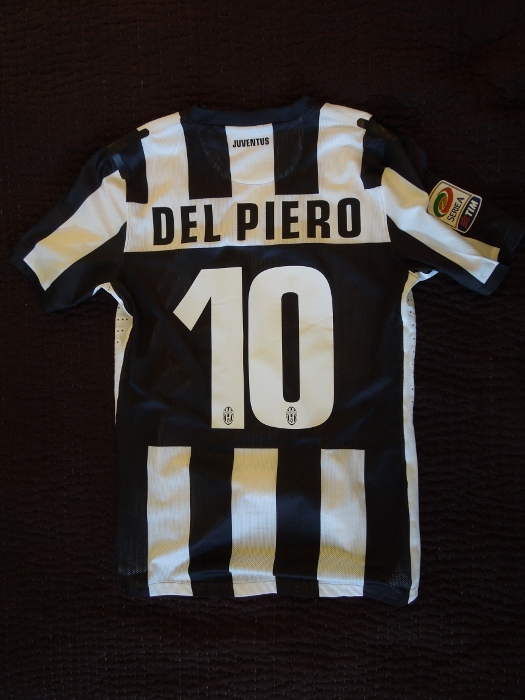 A big part of football shirt design is always the sponsor logo. A bad looking sponsor logo can easily ruin an otherwise good design. Juventus has American automobile brand Jeep as shirt sponsor. Their square shaped logo really blends in well with other straight lines of the shirt and also as the logo is black and white, it doesn’t stand out too much so it maintains the clean look of the design.

Before and right after the shirt’s release, all the talk was about stars. Italian football federation grants clubs the option to wear a golden star for every 10 Scudettos they’ve won. After last season’s triumph, Juventus has now won Serie A 30 times that would mean that they are the first club in Italy who can wear three golden stars on their shirt. However, the 2005 and 2006 championships were revoked as a result of the Calciopoli sporting trial. So according to Italian federation Juventus has won only 28 championships officially. Because of this argument and maybe as a little protest Juventus decided to ditch the stars all together from player shirts. Instead, the shirt has the “30 sul campo” (30 won on the pitch) motto under the club badge. There are however many options for fans to customize their shirts with the stars. The shirts come from Nike pre-printed with two stars. The third star can be added and some places even offer an option to have a black and white badge placed on top of the two stars on the authentic version shirt to get the same look as players. In my opinion having all the stars on the shirt adds a great looking detail on the shirt. Besides, every Juventus fan knows that Juve has won 30 titles on the pitch – end of story. 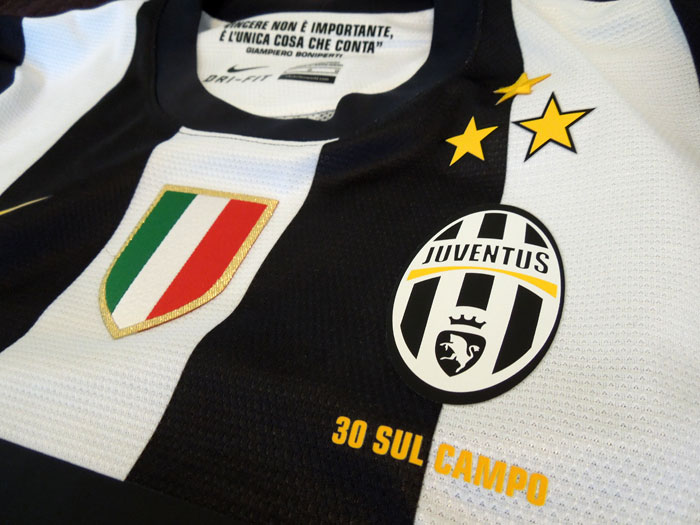 Nike has started to add team or country specific slogans or logos on the inside of their shirts recently. Usually these designs are located inside the shirt just beneath the emblem or on the inner back neck. Although these designs can’t be seen when the shirts are worn, they still add a nice touch of detail to the whole shirt design. The idea behind these design details might be that their existence is more important to the wearer than people who look at the shirt. The inner neck design detail on the 11-12 Juventus home shirt is a club motto “Vincere non é importante, é l’unica cosa che conta” (“Winning is not important, it is everything), a sentence by club legend Giampiero Boniperti. This is truly a well chosen slogan for the shirt and a nice idea by Nike. 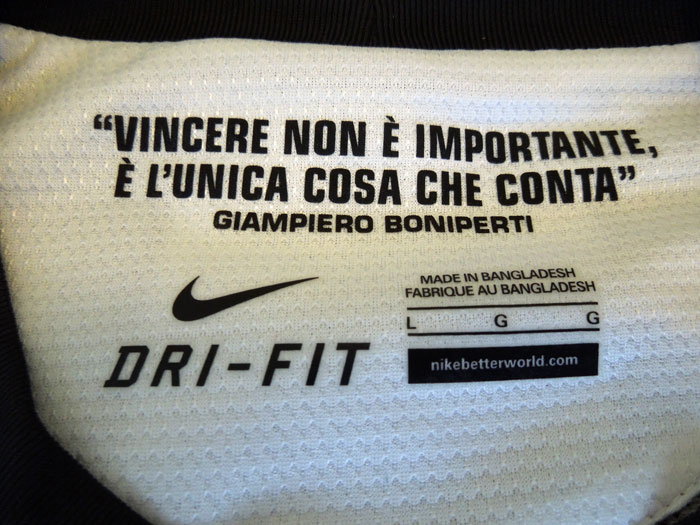 Juventus won the Serie A title last season so they wear the Scudetto badge on their shirt this season. There are currently two versions of the Scudetto badge available for the shirt. One by Nike and one by Stilscreen. The two versions are almost equal but there are a few little differences. The Stilscreen badge seems to be slightly thinner and it has shinier glitter golden edges. The Stilscreen version looks maybe a little bit better on the shirt. But still the main thing for a Juventus fan is that there is only one team wearing this badge in the Serie A this season. The shirt can also be equipped with the Serie A badge to get something extra although the shirt offers plenty even without it. Another little design feature is “Juventus” printed on the back neck. 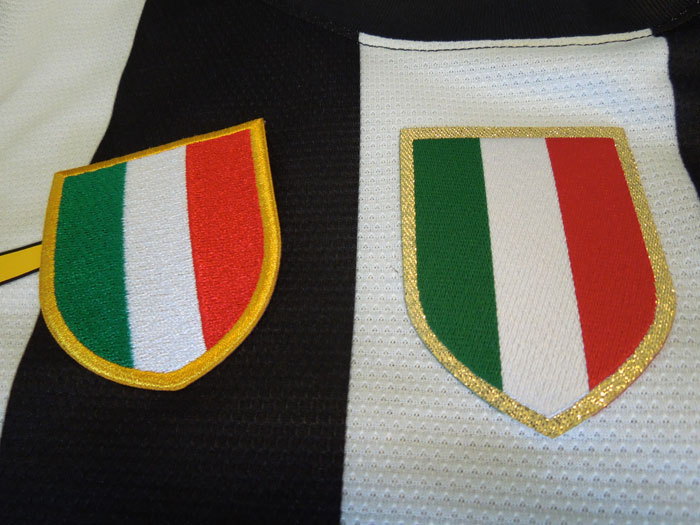 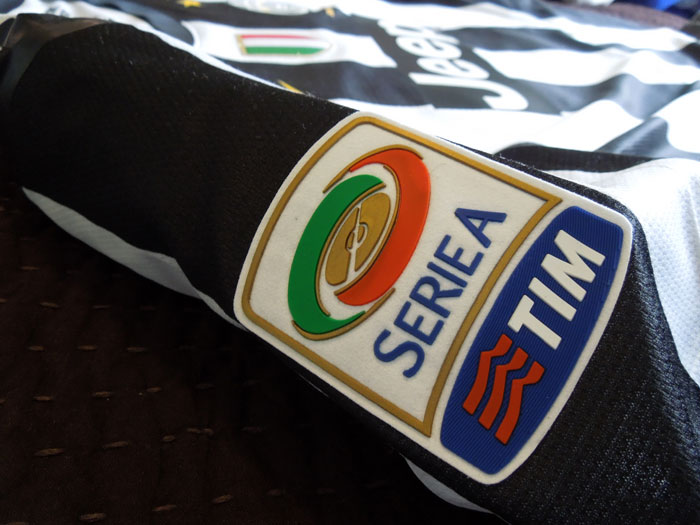 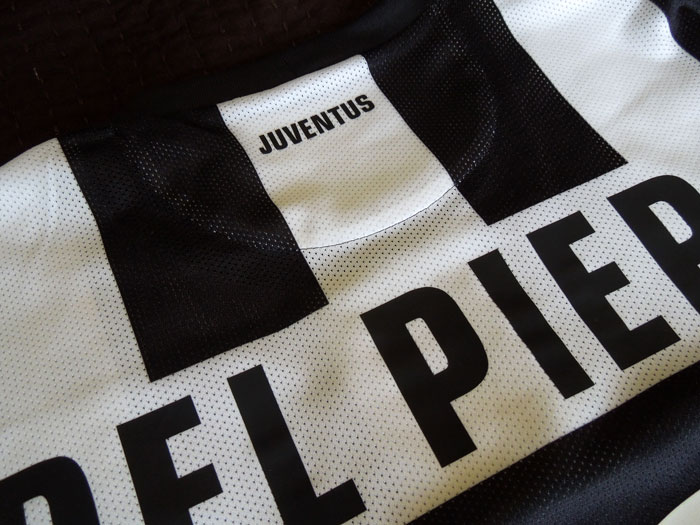 All Nike’s football shirts are made of recycled polyester. Some might consider this only a marketing trick but certainly it’s not a bad idea to think about the environment a little. Also the Juventus home shirt is made of Nike’s Dri-FIT recycled polyester material. The material is very breathable, light and comfortable at the same time. The shirt was also tested while playing football and it performed well. The breathable fabric wicks sweat away and the material is also a little stretchy so it doesn’t limit your upper body movement and it offers you a good overall fit. Because the material stretches a little you can go one size down with the replica version to get more of a body hugging fit if you want. With the authentic version you don’t need to go one size down as the shirt already offers a very athletic fit. The construction of the shirt seems to be strong Nike quality so the shirt will withstand even heavy usage and multiple washes well.

The Juventus home shirt under review came with Del Piero 10 printing. After last season Del Piero moved to Sydney FC but after 19 years of service for The Old Lady he’s such a big legend for the supporters that many will still choose his name and number for their shirt.  The name and number fonts on this year’s shirt are very simple so they suit the simple overall design of the shirt well. The material of the printing is very thin PU that can crack a little after heavy usage but still the wear tends to be only minimal and can only be seen under closer inspection. The name and number sets come from the original manufacturer so they are the best quality you can get. If you like your shirts printed then you should definitely go for it, as the printing looks great on this shirt. 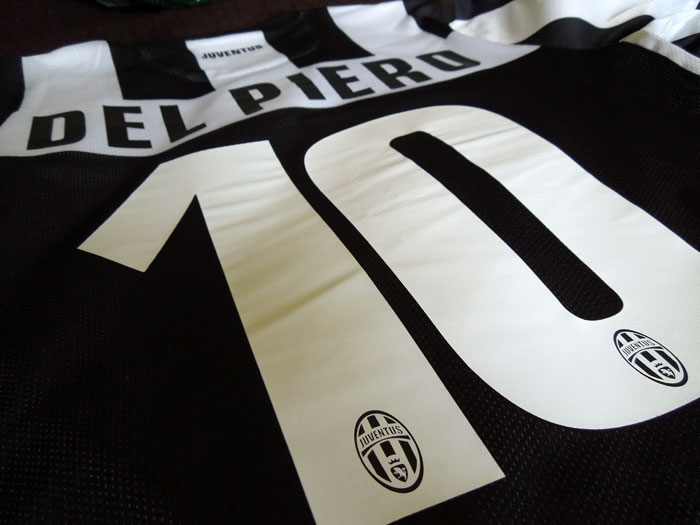 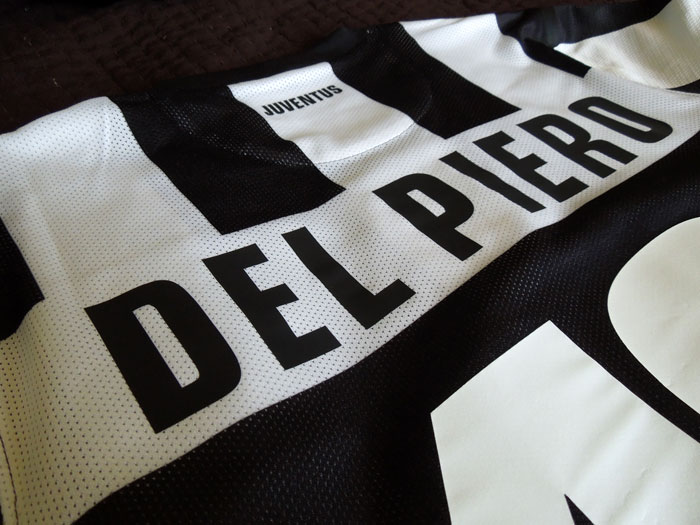 As Nike is offering multiple versions of their football shirts you have many options to choose from. If you’re looking for a more athletic fit you’ll definitely get it with the authentic version but you can also get it by going one size down with the replica. The authentic version offers you all the extra features that the player shirts have. They include mesh material back panel, silicone T-bar prints on the shoulders, heat transferred Nike Swoosh and Juventus emblem, laser-cut perforations at sides, taped inner seams and little added cotton on the material. These features have a minimal effect on the performance and comfortability of the shirt in reality but they alter the look of the shirt a little so if this is something you are looking for then you should definitely invest in it. In the end the replica version might be a bit more durable as it comes with embroidered Swoosh and Juventus emblem. But I don’t think it’s a question of which version is better. It’s a question of which features you are looking for. You won’t be disappointed with whatever version you choose. 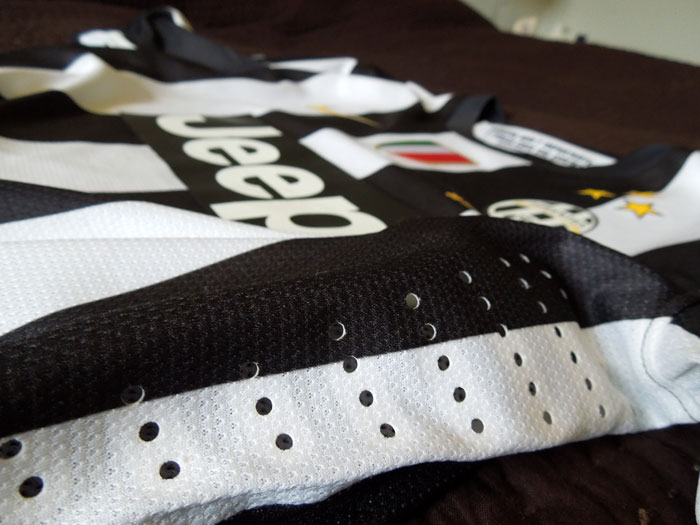 Laser-cut holes on the sides. 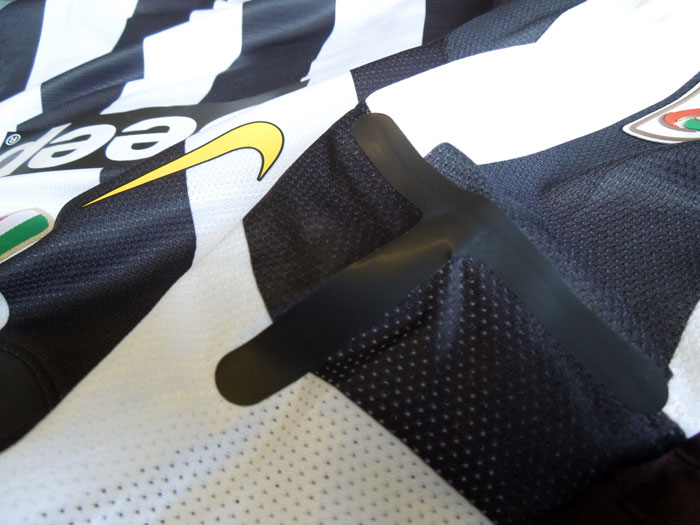 Silicone T-bar print on the shoulder. 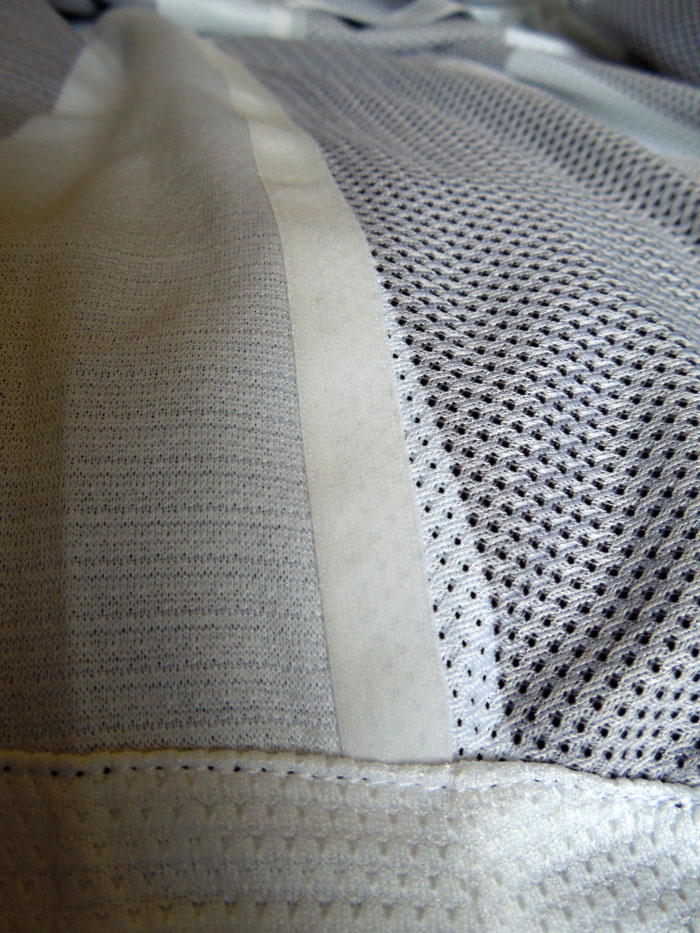 Taped inner seam, different material on the front and back of the shirt.

The Nike Juventus 12-13 home shirt doesn’t disappoint. It has a very simple and traditional design but at the same time it offers multiple little design features that add some versatility to the overall look of the shirt. In addition there are many options to customize the shirt with badges, names and numbers to get something extra. Even with the dispute regarding the stars the shirt has such a nice design that it’s a great tribute to Juve’s 30 Serie A titles and a must have for any Bianconeri fan. 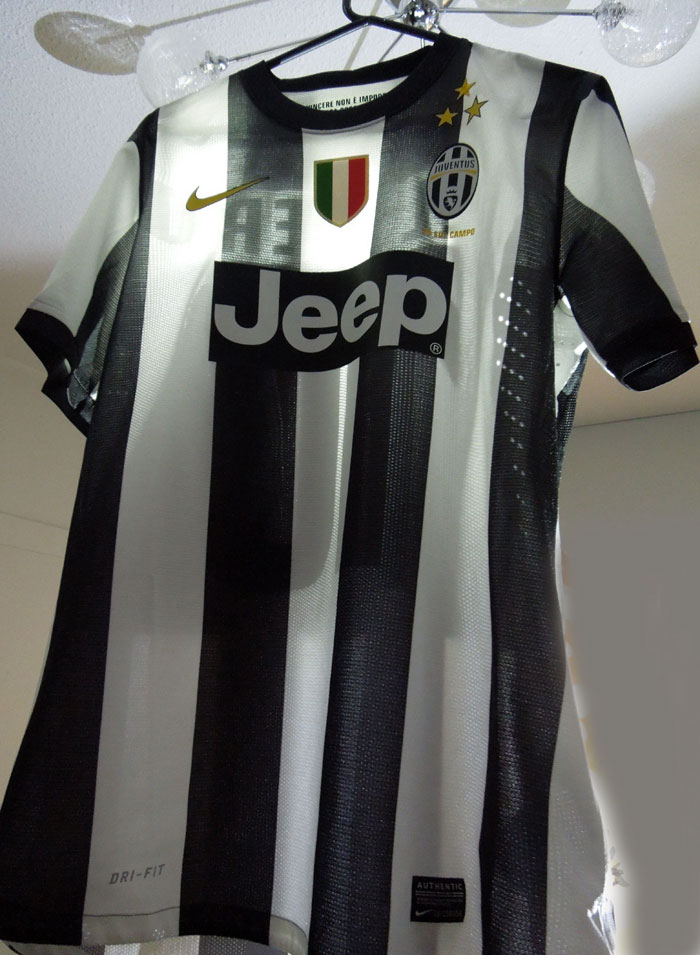