A lot of focus on the jerseys. Some focus on the name and number kits with player name and number placed on the backside of the jersey. Shorts number ? well not much attention is paid to this aspect of the uniform. So let’s try to break it down and take a look at the intricacies of the finer details of the short number.
PS PRO 2013-16 Official name and number style for the English Premier League.
The replica style PU is still in use as well though. 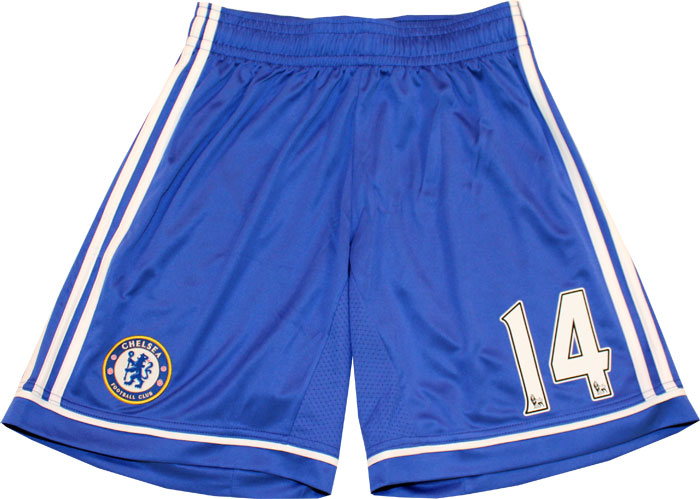 The short in the image is size Medium.
The material is plastic as compared to the previous style which was in flock.
Hard to tell from the image though what the difference is. 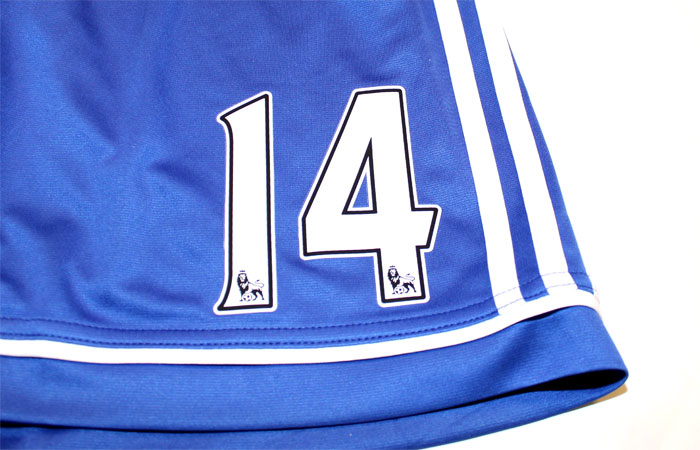 The shorts in the image are the Chelsea home shorts for the season 2010/11. The club logo is to the right thigh, the Adidas brand logo to the backside of the left thigh , and the shorts number has been added to the left thigh to the front side. 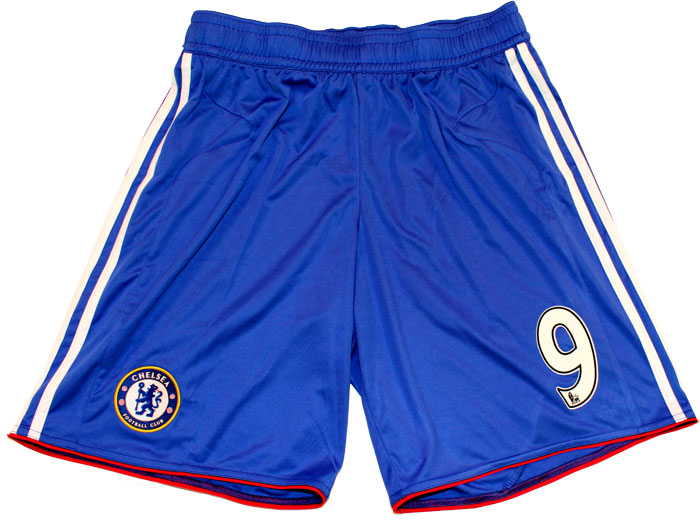 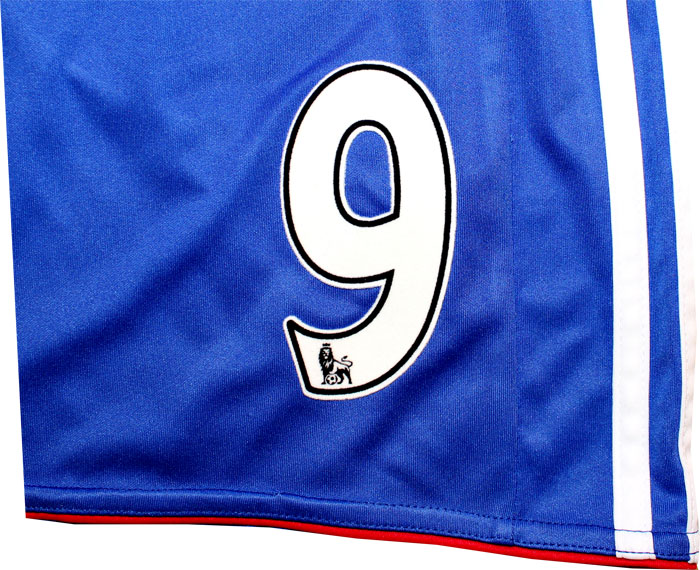 The shorts number is the official EPL white/black 100 mm number used during the seasons 2007-2013. The material is Senscilia a flock like material similar in style and feel to Lextra.

The maximum number of characters allowed is 2. But how does the addition of another number affect the alignment ?
In the image below the Chelsea club logo is aligned similarly to the logo above.
1 cm from the vertical trim and 1.2 cm from the vertical trim.
The shorts number however has been placed with 0.5 cm to the bottom trim and with approximately 2 cm to the vertical trim to the right. The positioning is at the discretion of the printer. Above the numbers are aligned with bottom line of the logo. Here they stretch below and above as to try to align the logo to the center of the numbers. 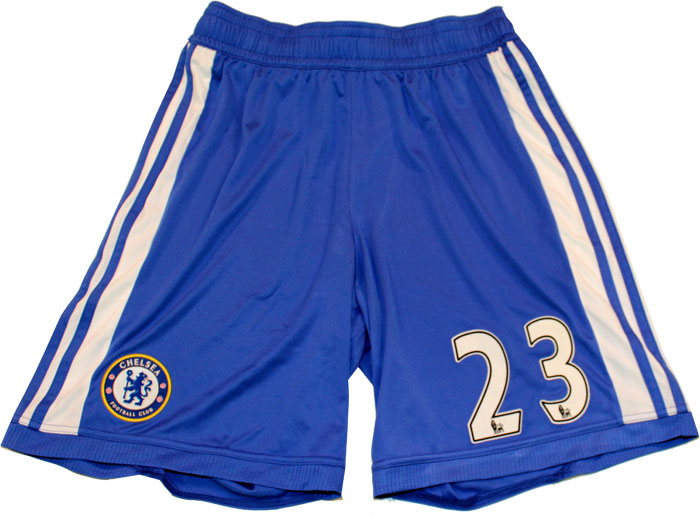 Size of the shorts: Medium

The material of the numbers is the same as for the 2010/11 shorts.
Close-up of the numbers to give a better indication of the proportions and the exact alignment. 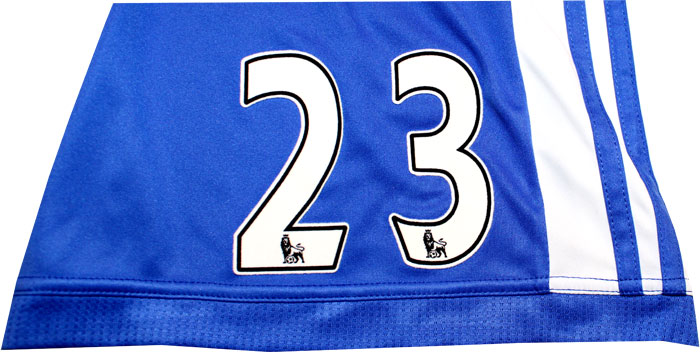 But not all shorts in the Premier League are from Adidas. Most other brands stick to a format with club logo to the right thigh and the brand logo to the left thigh.
The Manchester United shorts below an example to prove the point. The Nike logo goes lower than the club logo as to make room for the shorts number above. 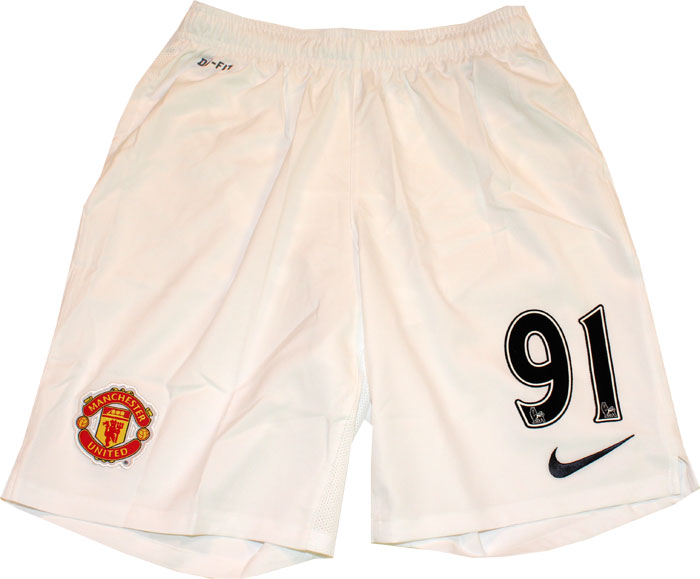 Size of the shorts: Medium
and the details: 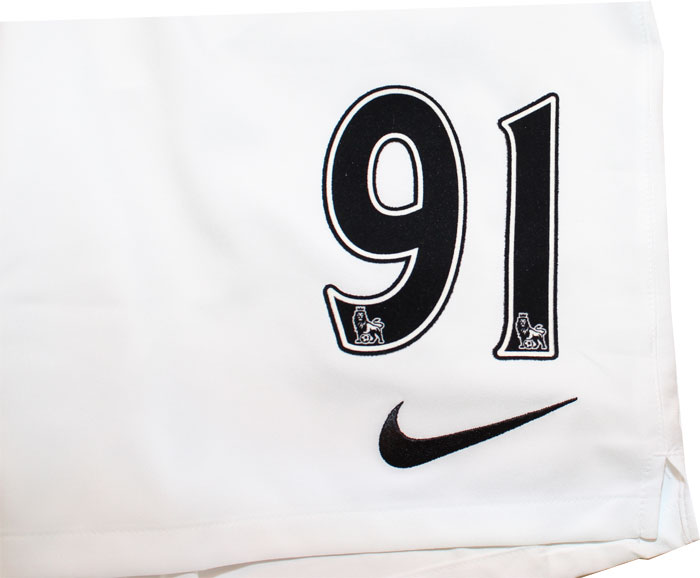 The numbers are the black/white Premier League numbers 100 mm high.

The logo of the Premier League is engraved in the numbers.

The Man Utd logo has 3.5 cm to the edge horizontally and 2.4 cm to the trim at the bottom.

In the English Premier League they use 5 different colorways for the names and numbers:

navy and gold are used from time to time while red is rarely used.

This poses a challenge to the retailer since it is troublesome to have to carry the full alphabet in red/white including 100 mm shorts numbers when demand is very limited.

the solution in the example below is to use the black/white font instead even though the correct font would be the red/white. 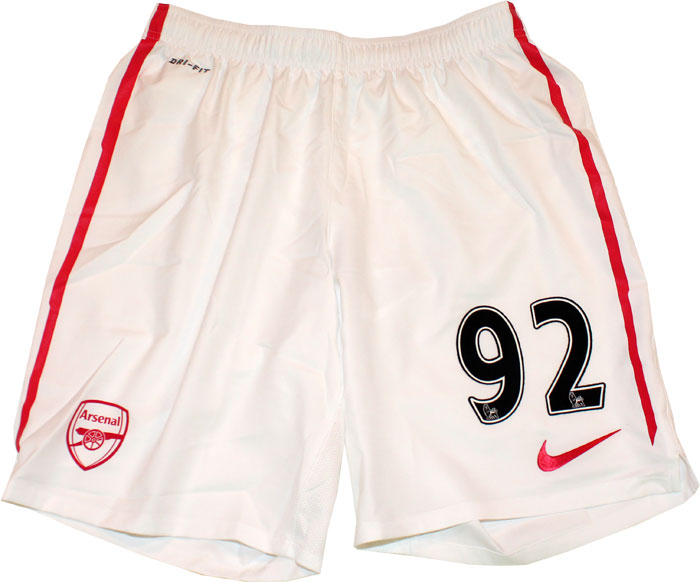 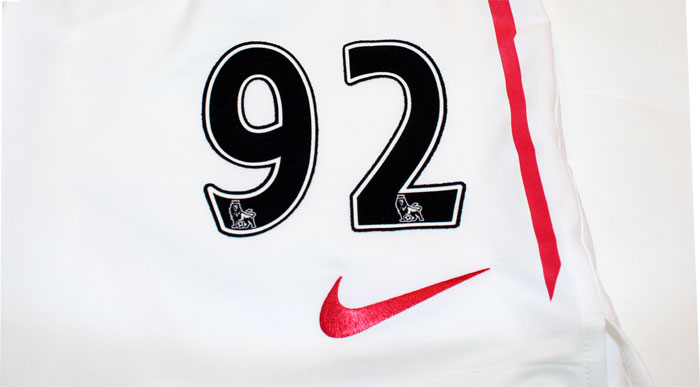 The swoosh is red, the line along the edge is red , and the club logo is red. Black , red , white works quite alright though but of course it is not 100% correct technically speaking.

England is not the only country where they use shorts numbers in the professional football league. In Spain the shorts numbers are an integral part of the uniform as well.
The case of FC Barcelona. 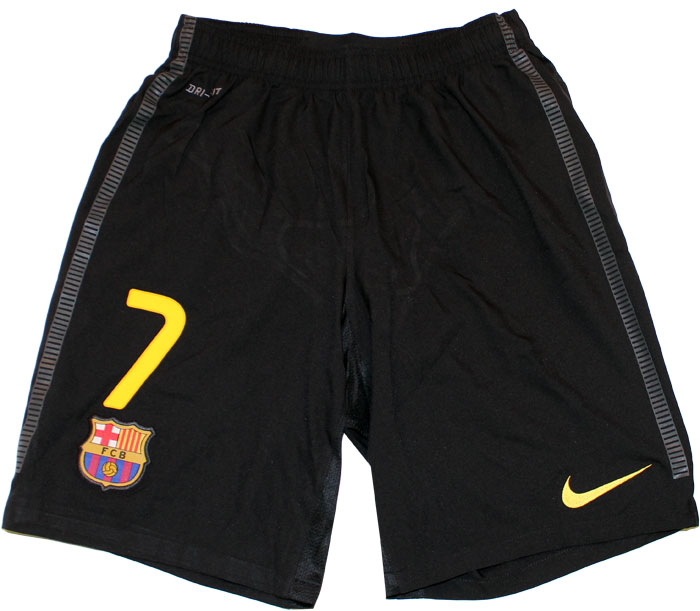 Size of the shorts: Small

The shorts number here is above the logo to the right thigh.

The Barcelona shorts number does not contain the club logo.

Below a detail shot. 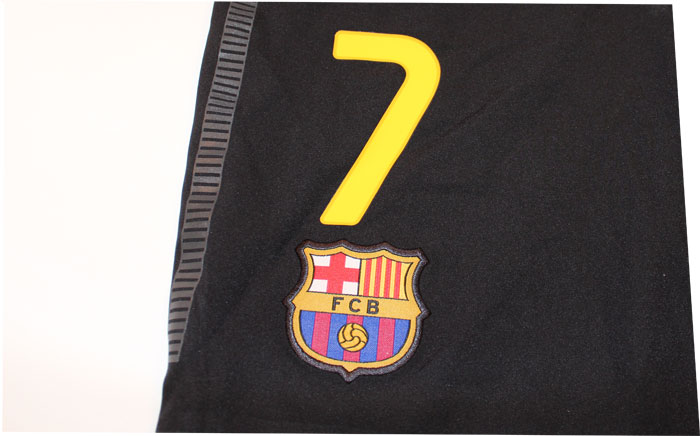 That goes for a single digit number. But how about when it is doubled ? 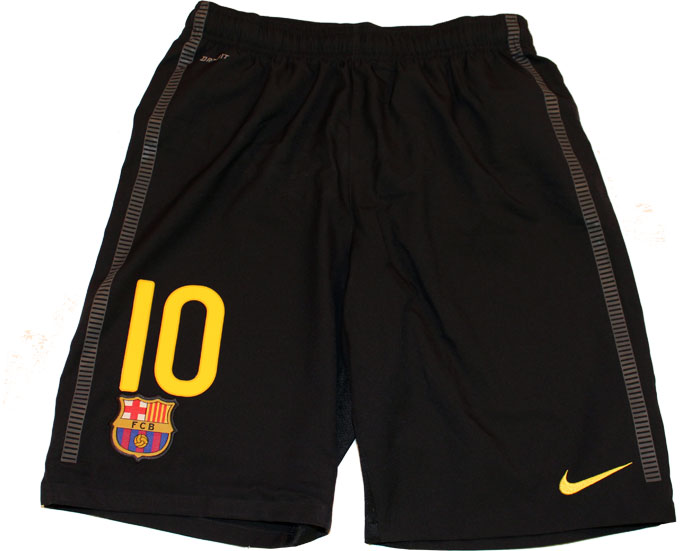 And the closer look. 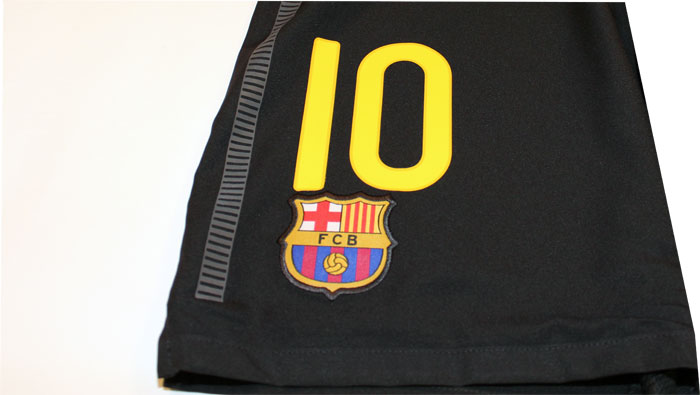 The number one is closely aligned to the left edge of the logo. The 0 spills on to the other side of the logo since the numbers take up more space than the logo on the horizontal axis.

The Barca numbers are 10 cm tall. the 0 is approx. 5.5 cm wide.
As to the difference between home and away shorts. in this case there is none. all the same. 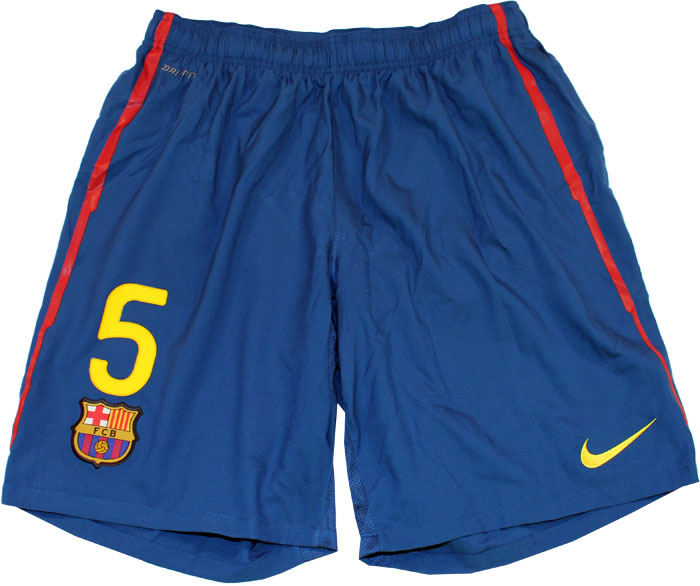 For the season 2011/12 the shorts numbers were yellow for the home as well as for the away shorts. 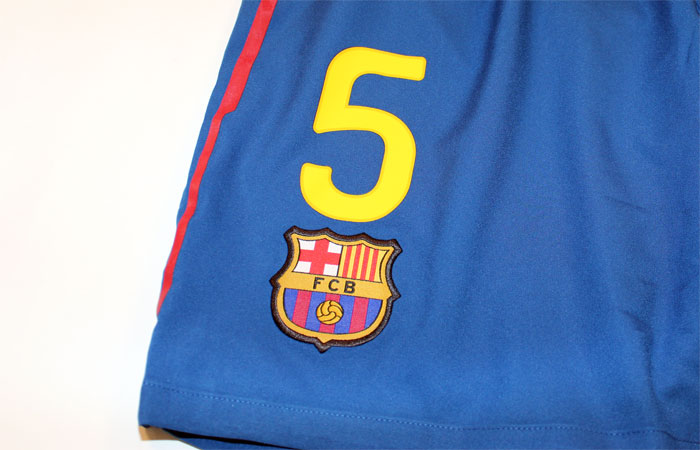 Size of the shorts in the image: adult mens size XL
That surely brings a different expression compared to the smaller shorts above.
Why the number above the club logo ? well , probably for no practical reason but simply a decision made by someone and now they stick to it. Some might prefer the number to the opposite side others like it like that.
No rule without exceptions. Rather than try to align a double digit number to the left one can also decide to align it towards the center of the logo. 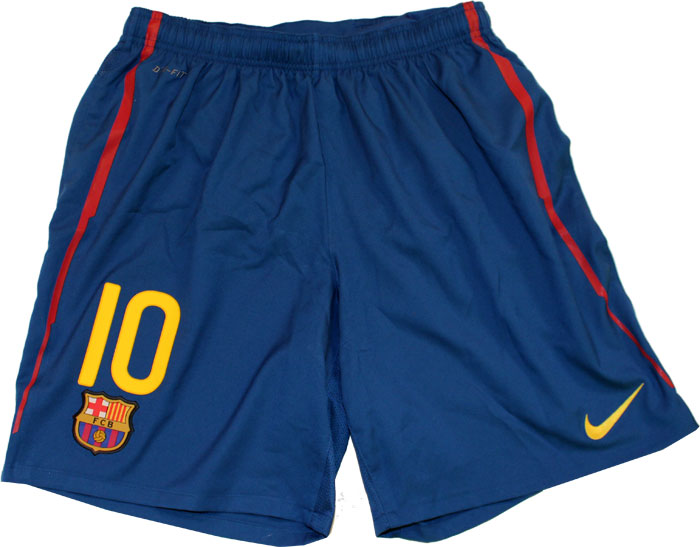 and the detailed look: 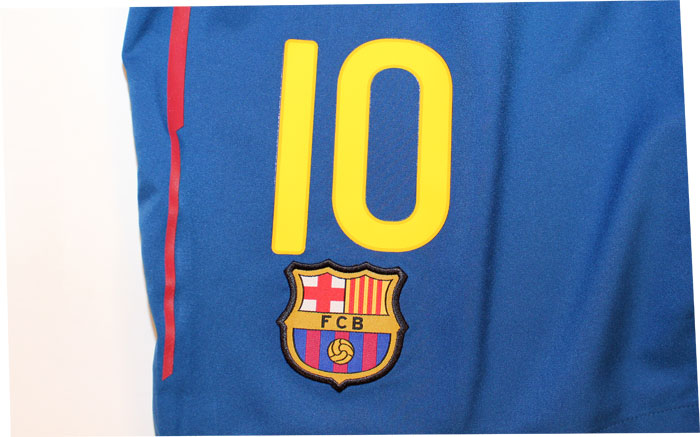 and the size of the shorts. just to get the documentation right. Size XL.
Say Barca and the next thing you want to know is how it works with Real Madrid ? 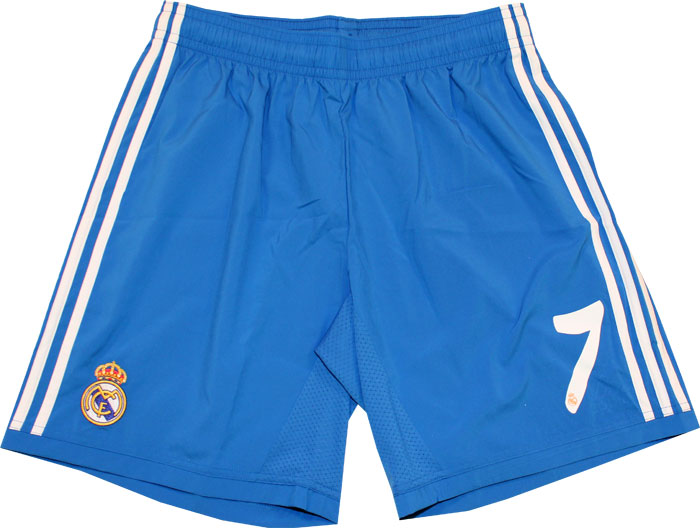 The size is size Large for the shorts in the image.
Real Madrid away shorts close-up look at the number. 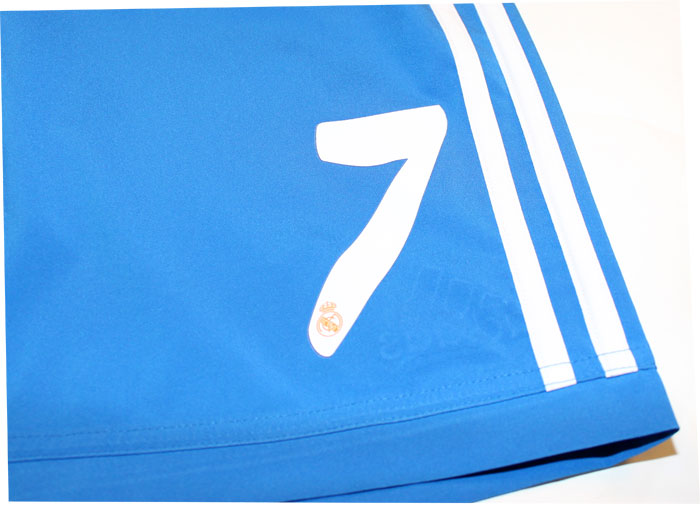 Real Madrid does have the club logo added in the 10 cm numbers: 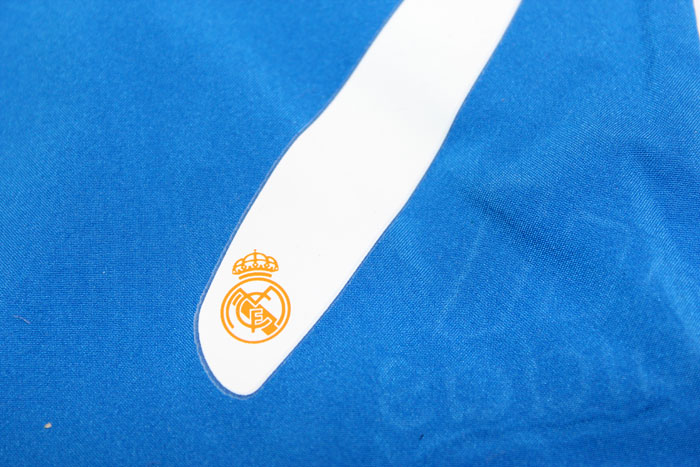 and just to complicate matters even further certain Italian clubs like Juve and Inter prefer to place the shorts number next to their club logo but on the inside of the short and not above the logo as is the case with Barcelona. 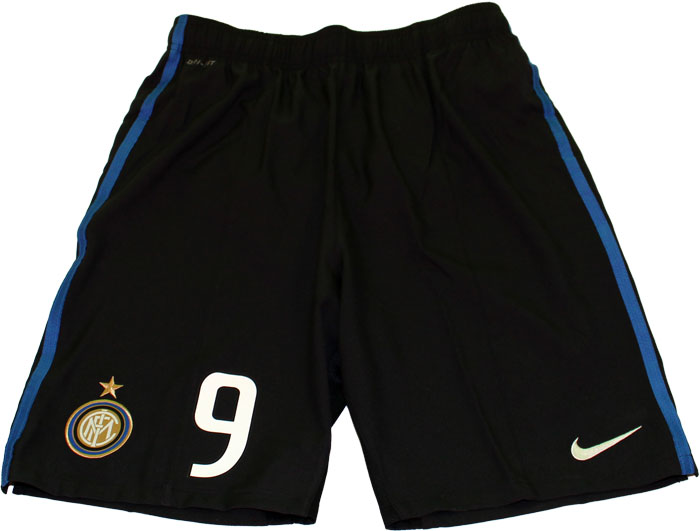