New Partnership Represents the Biggest Deal in Each Organisation’s History 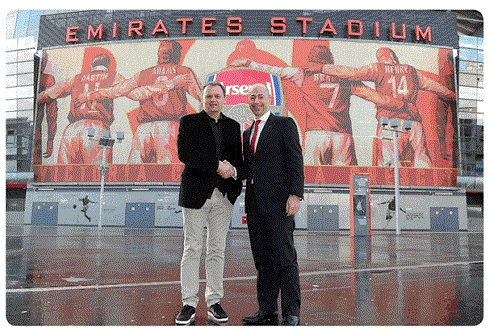 London, UK (27th January 2014) – PUMA and Arsenal Football Club have today announced a long-term partnership. Effective 1st July 2014, PUMA will become the official kit partner of Arsenal. In addition to producing the playing and training kit for all Arsenal teams, PUMA has acquired wide-ranging licensing rights to develop other Arsenal branded merchandise on a global basis. This new commercial partnership represents the biggest deal in PUMA and Arsenal’s history.

PUMA and Arsenal will work together to bring further innovation into the sports brand’s performance apparel range.  Both organisations will work collaboratively on a global strategy to drive mutual growth across all football markets, achieved through PUMA’s global sales network, international tours and integrated marketing activities. Arsenal also presents PUMA with its most prominent platform to showcase performance products through its significant global fanbase, profile and reputation.

Bjoern Gulden, Chief Executive Officer for PUMA said: “Arsenal have been a key strategic target for PUMA for a number of years now. Through a clear commercial vision, a well-defined sports marketing strategy and a relentless enthusiasm within the PUMA organisation, we’re proud to have signed this partnership with a truly global football club. As we enter a new era in our company history, Arsenal represents a major commercial and marketing opportunity to reinforce PUMA’s credibility as a global sports brand, and we have full confidence the plans in place to activate this partnership will have a significant global impact.”

Ivan Gazidis, Chief Executive Officer at Arsenal Football Club said: “We are excited to be partnering with PUMA, a company whose football heritage and record of innovation have a strong affinity with our own. This represents another important step forward in Arsenal’s progression on and off the pitch.”