So which players sell the most jerseys ?

Well, the numbers are confidential so it is everyone’s guess. But some estimate can be made.
These figures go for the season 2014/15 and will surely be different for the season 15/16 and as they were from the season 13/14.
10 best selling player name kits by 90minutes 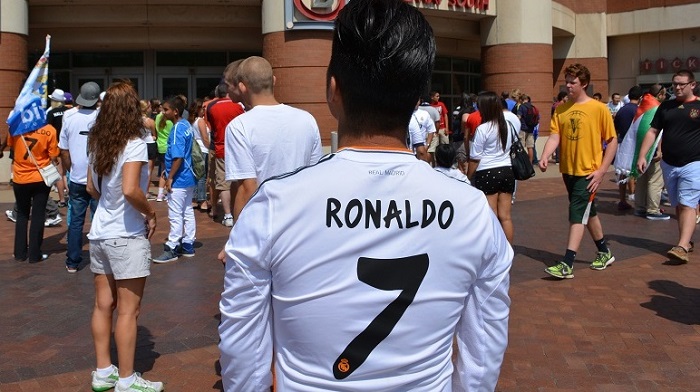 From the bottom to the top:
Ibrahimovic (PSG)
Balotelli (LFC)
Robben (FCB)
Sanchez (AFC)
Fabregas (CFC)
Di Maria (MU)
Falcao (MU)
James (RM)
Neymar (FCB)
Messi (FCB)
ROnaldo (RM)
The 10 best selling players in the Premier League for the season 2014/15 should be the following. Which contradicts the figures from the list above. Unless the figures below are UK sales only while the figures above are global sales ?
Best selling PL jerseys
Also if the figures are based upon nameblocks sold it might over-estimate the figures of the stars. Since less famous players might sell as custom names made up of single letters thus not featuring in the statistics.
Also the question is whether the figures below are for the full season 14/15 while the figures above might cover the calendar year 2014. Fabregas might have sold a lot upon his arrival in London but that was already in 2013.
v. Persie: 1.2%
Kun Aguero: 1.46%
Gerrard: 1.76%
Falcao: 1.99%
Rooney: 2.09%
Hazard: 2.10%
De Gea: 2.16%
Diego Costa: 2.27%
Alexis: 3.80%
Di Maria: 9.59%

No major surprises. But very impressive that De Gea made it to the top being a goal-keeper.