Serie A badges TIM | Scudetto badge | Coppa Italia patch
Latest news from the scene from Italy. For many years the distribution of the Serie A TIM Lega Calcio sleeve badge was restricted and could only be sold to the clubs. Thus the badges were not available for general retail and only entered the market through the backdoor for next to end up at ebay and other market places. In that case a new issue would arise as how to confirm if the badge was genuine or a fake copy.
Starting with the season 2015/16 Italian producer of badges and transfers Stilscreen has managed to break the deadlock though and the badge is now available for general retail. The new badge and the old badge are very similar in style. 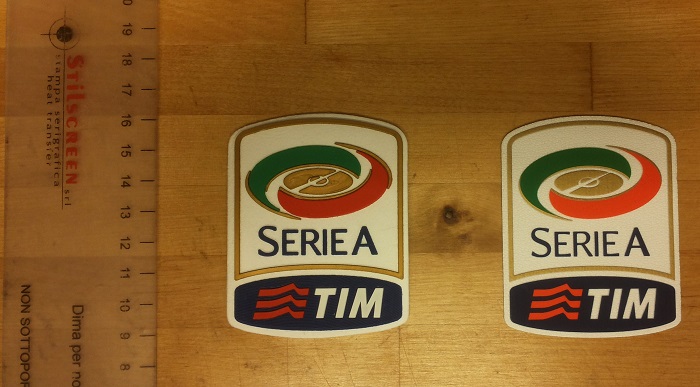 Both badges are around 7.3 cm long at the center. The width is around 5.7 cm.
The badge to the left hand side is the badge for the season 2014/15. The badge to the right is the badge for the season 2015/16.
As to the differences the old badge is slightly thicker, 1-2 mm, thicker. The new badge is brighter in the colors. It feels lighter and more flexible. All in all it seems like an upgrade compared to the 2014/15 version. 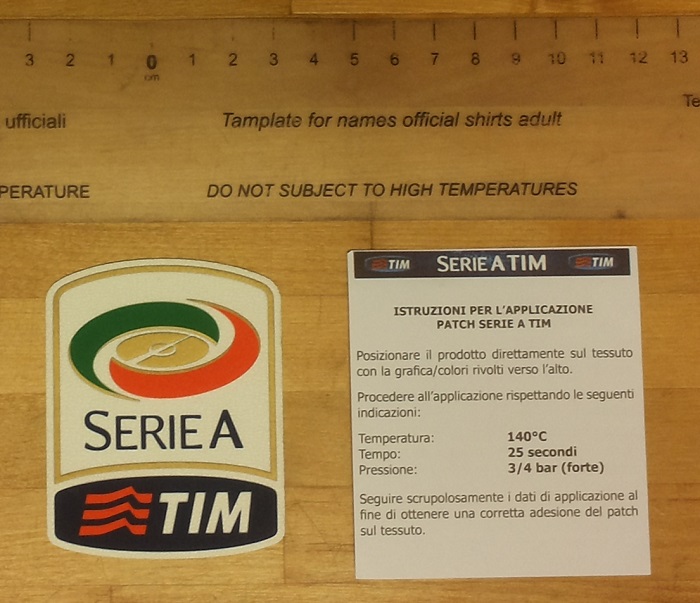 The badge can be applied at 140 degrees and for a solid 25 seconds. No plastic to peel off. The pressure should be moderate 3-4 bars. Usually the scale runs from 1 to 5.
Designwise the badge uses the logo of the professional Italian league.
Lega Nazionale Professionisti Serie A: Click here to check out the website Lega Serie A
The color scheme is as it is often when it comes to anything Italian dominated by the colors of the Italian flag: green, red, white. Whether the blue of Serie A team is relating to Azzurri or the blue color of the sea as well as the sky of the Mediterranean is unknown. But likely.
The badges is bordered by thin golden line. Since it is the not a Champions badge it does not imply any honors per se. Unless one considers participation in the Serie A as being an honor in its’ own right. The circular form at the center is also in this golden color. Looks like a football given the round shape. Choice of color might be arbitrary or imply some kind honor related to playing at the highest level and competing for the title of all Italian league football.
The badge is applied to the right arm sleeve.
However, the Italians like to embroider the shirts to the max. so it does not stop with the league badge. There are additional badges which can be spotted on the jerseys around the Italian league Serie A.
Coppa Italia. 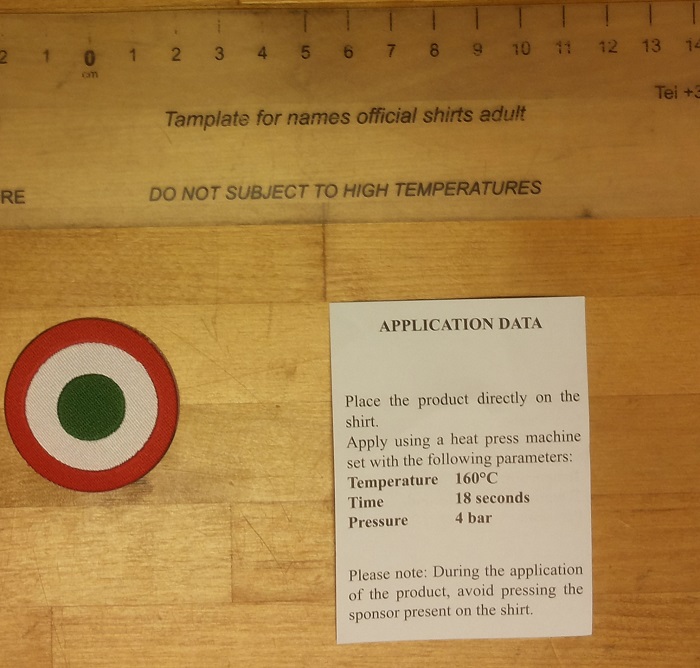 The Coppa Italia badge has a different texture than the Lega Calcio badge. The Lega Calcio badge has a feel of plastic and rubber while the Coppa Italia badge is more cloth like. It has a softer feel to it and a different texture.
It is plain round with a dimension of approx. 4 cm radius.
Again the color scheme is made up of the colors of the Italian flag: red, white, green.
And what does it do good for ? well, in fact it is the reigning Cup Winner which has the honor to wear the badge during the following season. Juventus won the Italian Cup called TIM Cup for the campaign 2014/15 and thus hold the right to wear the badge to the chest of the jersey for the season 2015/16.
In order to make it stick it has to be applied at a relatively high temperature of 160 degrees.
Scudetto: 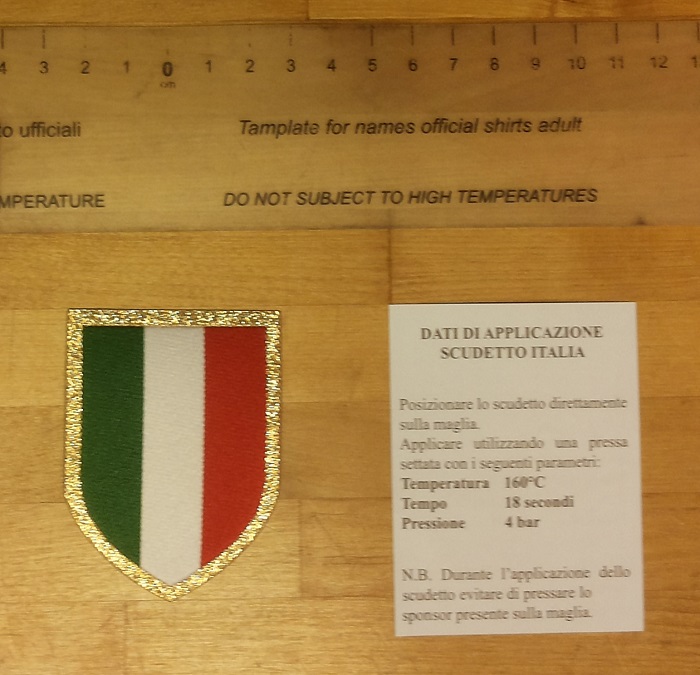 The Scudetto badge is larger in size than the Coppa Italia badge. It measures around 6.9 cm top to bottom and 5.1 cm across. The motive is the Italian flag with a glitzy outline of the purest gold. At least when it comes to the color. The fabric is similar to that of the Coppa Italia badge. A soft texture of a cloth like fabric. The badge will be applied to the fabric of the jersey by releasing the glue on the backside which will make it stick.
The badge is an exclusive badge reserved for the winner of the previous Serie A campaign. Thus for the season 2015/16 the sole club with the right to wear the badge will be Juventus because they won the Serie A for the season 2014/15.
So Juventus will wear a minimum of 3 badges during their matches in the Italian for the season 2015/16 while when it comes to performances in the UCL they can even top that number by adding the Starball as replacement of the Serie A badge and then adding the Respect badge to the left arm sleeve.
Some fans enjoy to add these badges to their jersey while others do not bother or may even find that they detract from the value by adding to many noisy elements to the otherwise fairly clinical design. Yet others observe the badges while watching a match on TV and probably think that in order to get the “real thing” they will need to add these badges as to make it as identical in style as possible to the one on display on TV. TV has a huge importance when it comes to replica sales since every match is like an hour long commercial for uniforms and cleats. And it is also where many fans discover specific elements relating to the replica kits. Like if a player has changed the squad number, or they realize that there are also shorts numbers, or maybe a special badge like UEFA Respect badge which only appeared some seasons back and which is not available for general retail.
Many fans have also inquired about how to get hold on the Lega Calcio Serie A TIM badge over the years and the reply has always been somewhat hesitant yeah well hard to know why we cannot buy these badges wholesale. Well, we might be able to get a few pieces now and then through the backdoor etc.
But all of these concerns are now gone. Finally the Serie A badge is freely available and is distributed world wide by Stilscreen.
Whether the product is one of interest to you  – is a different question though ? Do you think it adds value to the jersey or do you prefer to keep your jersey clean and without too much external noise ? well it all comes down to personal taste and specific preferences.
Check out the information about the Serie A badge here from the Stilscreen website!
and as well about the Coppa and Scudetto badges.
Check out the official information the Scudetto and Coppa Italia badges here!
Forza Italia!