Real Madrid vs. Inter Milan, two of some of the most famous and well supported football teams in the world met up in St. Louis, Missouri on 8/10/13 at the Edward Jones Dome, the home of the NFL’s St. Louis Rams.  Living near the Washington D.C. region meant that I would’ve had to drive almost 1700 miles round trip but knowing that the pot of gold at the end of the rainbow was going to be a live Real Madrid performance made the trip even more enticing. 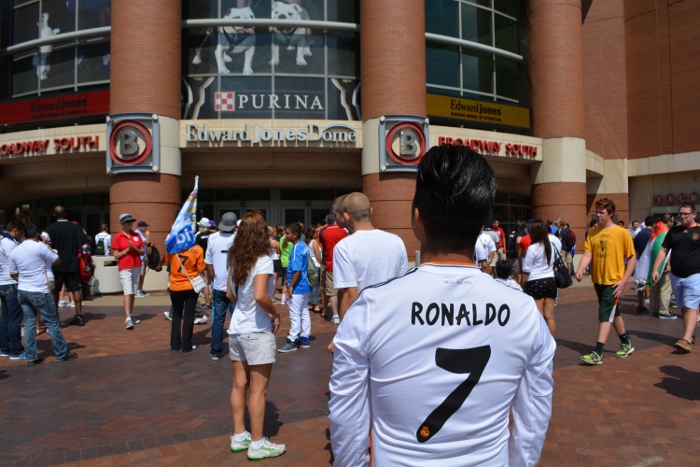 I drove through six states in a matter of thirteen hours and when I reached St. Louis, the town was bustling, just as I’d imagined.  St. Louis definitely gave off a mid-west city vibe and had something for everyone.

In the morning leading up to the event, chaos ensued.  The freeways leading into the city were jammed with traffic.  Due to lanes being closed because of construction, it set everyone back a while and although it took me an hour to drive three miles, I was lucky to have left a bit early to make it in time.  When I finally arrived, Real Madrid fans were scattered all throughout the streets.  You’d see the occasional Inter and Italy shirts but 85% of the fans (including myself) were pulling for Real Madrid.  Regardless where your loyalty lied, it was a great day for football.

While rocking the new Real Madrid shirt, provided to me by the awesome people at MMSports.com, I was ready to go and into the stadium I went.  As I located my seat, I couldn’t believe how close to the pitch it was.  Hordes of Real Madrid fans gathered around the railing in front of me during the shootaround to get a chance for an autograph but it could have been their exhaustion from the International Champions Cup but none of the players took the time to mingle with the fans on our side of the stadium.

By the time kickoff came around, it was a near full house.  54,184 people flocked to the stadium to get a glimpse of their favorite athletes and that turned out to be a new city record for a football match, breaking the previous record of 48,000 held by the Manchester City and Chelsea friendly at the Busch Stadium a few months prior. 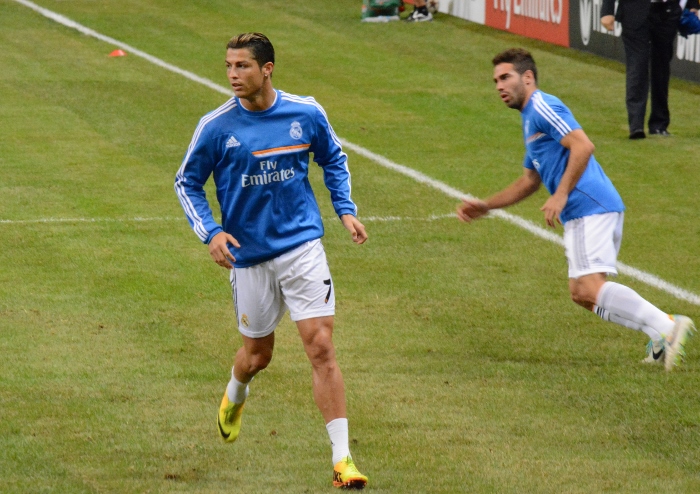 Within five minutes after the start of the game, it was clear that Real Madrid was going to dictate the pace of the match.  Kaka scored on a second chance header in the 11th minute and when Cristiano netted one in the 38th, everyone knew it was going to be RM’s day.  Inter had some good opportunities but lacked the decisive finishing throughout the entire match. 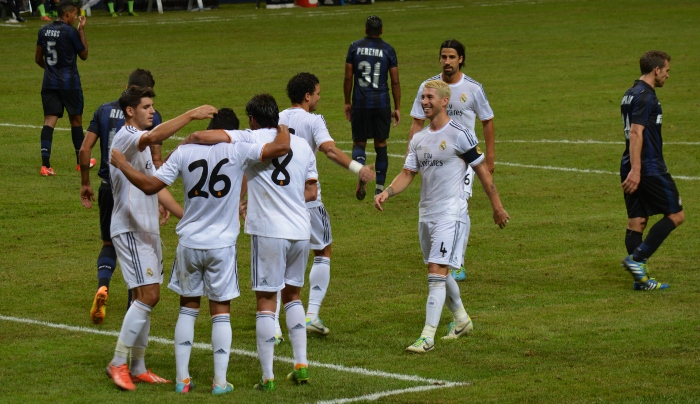 One of the best moments in the game actually came after the third goal for Real Madrid.  A few fans decided to run out onto the field to hug some of the stars, which caused a few minutes of delay but was entertaining nonetheless.

After the whistle blew, more than a dozen fans ran onto the pitch, one by one, to shake the hands of the players before they left for the dressing room.  It was hilarious to see security chasing them all over the field but considering how rare it was to see such world class athletes in St. Louis of all places, I could justify their reasons. 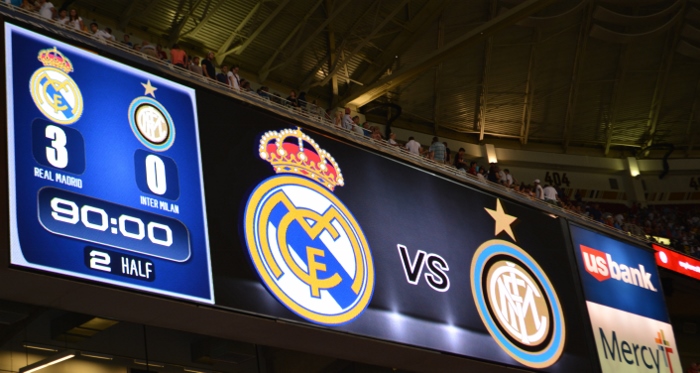 Real Madrid easily took the game 3-0 and back on the road I went to drive another 850 miles to home.  Attending games like this always reminds me that football truly is popular in America but needs to be cultivated more from the domestic perspective to really enhance the overall image of the sport.  The U.S. is making excellent ground on trying to remove the negative stereotypes of the game but still has a long way to go.  With that said, I wouldn’t be surprised to see it take over America in a decade or two.