MM Sport was founded in 1986 which means that technically and logically speaking 2016 must be its’ 30th year of existence. Which again means happy anniversary! time to celebrate ) 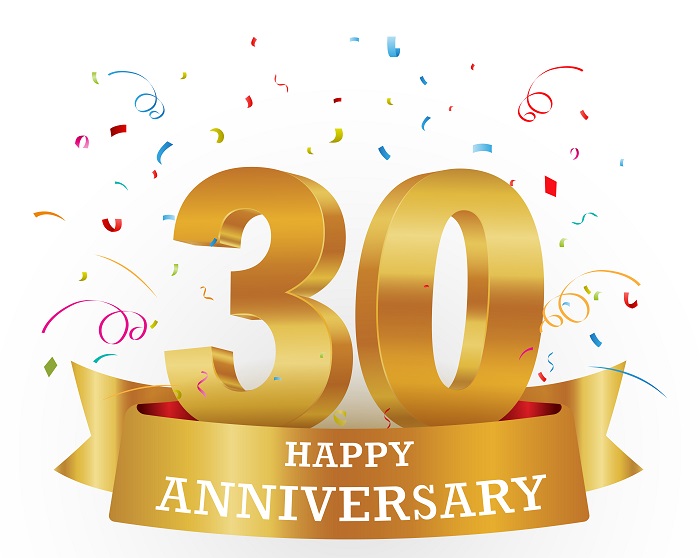 One may ask the question. What does the number 30 imply in the world of today ? Here a list with a few examples: 30 Years War during 17th century Europe was a transformative force within religion, politics, military technology and the power balance. 30 years birthday in the life of a human means that the immediate youth is over. 30 years mortgage is a standard maturity on housing loans. 30 days in a month is often used as reference for time calculation. +30 is the international dial code for Greece. Probably a prefix well-known in Brussels, Frankfurt, and Berlin by now. Not long ago 25 years would be considered the time frame of a generation. Today in many developed countries the time where a woman gives birth to her first child has increased so it might not be unfair to consider 30 years the time frame of a generation. Thus a person born in 1986 may in 2016 have reached the point in life where he or she is awaiting their first baby and thus the inception of a new generation. The 30 years MM Sport has been around for is in some way an image of what the generation of 1986 has been through. That generation which has been born between 1980 and 1995 is referred to as the Millennials. Not sure why a generation in a sociological perspective is 15 years and not 25 or 30 years. But maybe it is too long time to wait until a new term can be coined and new studied introduced and new marketing strategies developed towards a distinctly new group of consumers. And in any case the time frame from 1980 seems to be mis-guided since someone growing up in 1980 would have had a rather different experience compared to someone growing up in 1990. The breaking point distinguishing the two of course being the events at a global scale taking place during the years from 1989 and until 1991. Where were we in 1986 ? Ronald Reagan was well inside his second term having been re-elected in 1984. Chernobyl broke down releasing massive amounts of nuclear pollution. The World Cup 1986 took place in Mexico. Still being rotated between Europe and Latin America. The space shuttle Challenger explodes effectively putting an end to space exploration. At least in the US. The Sovjets at the same time launches a new space station called MIR. Gorbachev surges ahead with reforms of the Sovjet economy.

2006 was an important year for Germany. First time post WWII that the country could rejoice and let out the emotions without fear of being rebutted for neo-nazi nationalism. The World Cup 2006 was in many ways a positive return to the roots. Forgotten were the ills of the World Cup in 1990 – poor play , lots of controversy. The politically motivated tournaments of 1994 and 2002 with FIFA’s desire to expand football beyond the continents of Europe and Latin American to turn it into the world’s favored sport (or pastime occupation). And the scandals of the World Cups in 1994 and 1998. Germany 2006 was a fresh re-start. Not without its drama. Especially in the semi-final and in the final but without the negativity of previous cups. What will be remembered will also be the events off the field where a full country embraced the event and with the position in the middle of Europe and thus the ease of access the many people from other countries visiting participating in the party. Few violent incidents took place off the field and all in all the tournament will be remembered as a great event on and off the field. We are yet to see a successful tournament in a “new” footballing country – and I do not think that 2022 in Qatar will be when it happens. World Cup years with the world’s eyes firmly set on the event are always good years revenue wise. 2006 was no exception and MM Sport experienced solid sales. Even though Denmark once again was left out of a major tournament.

How will the industry evolve going forward ?

From the late 1990s and until the late 2000s there seemed to be a constant flow of new innovations being introduced. But for the past 10 years or so it has been a pretty steady and regular development without major upheavals or revolutions.

Apparel. The range of kits has been massively extended. The designs have been much more elaborate. The speed of new launches has gone up. Customization has been added which has opened up a whole new category.

Training wear and leisure wear ranges have entered the scene as part of the brand collections both as complement and as substitute for the kits.

Nike seems to have been driving much of this development taking their cue from the licensed market in USA sports which has most likely been established already in the 1970s.

But the vastly increased range of products and improved distribution was already in place some 7-8 years ago.

Official and licensed print products all came around no later than 2004-2006.

The kit ranges have not changed much in scope and setup since 2007-08.

The cycle of national team collections is pretty much in place for some time already evolving around bi-annual large-scale tournaments.

Merchandise has expanded and seems to be driven according to one out of two concepts. The Barcelona model which sells licenses to apply the Barca logo in different geographies. The FC Bayern model where the club runs all merchandising operations tightly. Even though in principle any product out there can be turned into a merchandising product in reality there is an upper limit as to which products make sense to buy as a Barcelona product from a consumer point of view. And the reality in a very scalable industry is that only a handful of clubs have any leverage outside of their home market on a global scale.

The CEO of Kitbag said in an interview that there would be a huge opportunity for increased licensed merchandise sales. He came from a Disney background in the US and with every new Disney movie they sold vast quantities of licensed products relating to the movie. He thought if the merchandise was done right a similar sales success ought to be possible with football.

Not sure if the two are really comparable. The closest we get are probably the tournament licenses for EURO, WC, and maybe the UCL. But the windows are narrow, 1-2 months every two years. And most of the value is derived by partner brands obtaining the license for a specific brand within a specific consumer goods vertical not really for general merchandise products like cups or scarves.

Equipment. Is small scale. Maybe 5% of the total. And it is run more or less like the merchandise simply by adding logos to existing hardware products. Only the tournament balls seem to have a slightly different setup. But I think Adidas has already taken the ball market as far as it can go. Finals ball. Tournament ball. Different colors, sizes, prices.

Footwear. Again a line of business which has been driven largely by Nike innovation putting colors on the boots, using new materials, using more lightweight materials, introducing high end boots to create aspiration and then selling massive amounts of take-down versions of the high-end boots without breaking the link. Another novelty is the principle of running 4 silos of different boots with different qualities and attributes and market them to be markedly different. Though in reality differences are slim.

HyperVenom and Magista were introduced to replace Control and T90 and while adidas has done something similar retiring F50 and Predator and brought on X and Ace well the basic principle already introduced maybe 10 years back is still firmly in place.

The new players trying to move into football if for nothing else to get some publicity for some of their other products like NB and UA follow exactly the same playbook as laid out above.

When Nike starts to pull back a bit it may be sign that they do not see a whole lot of options for moving licensed football forward. That the industry has matured and that growth will have to come from other sources. Recently they have made some massive college deals in the US. They will take over the NBA in 2018. Nike is 69% of US athletic footwear market. Adidas is 8%. And since the US is by far the biggest market in the world probably they think it makes much more sense to invest money at home where UA and NB have become fairly big players and where they must also expect Adidas to make a move. Out of their 30 billion USD sales how much comes from soccer ? 2-3 billion ? and if Steaua does not sell any footwear or standard apparel maybe it is not worth it throwing money after such deals.

All of this leads me to believe that this has become a mature industry with a pretty established setup and a fairly regular business cycle.