The ConFed Cup will take place in Brazil in June 2013.

There will be two groups at the initial stages of the tournament:

A new ball from adidas will be used for the tournament. 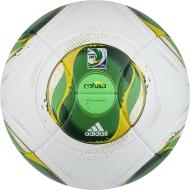 The design is new but the content is the same as for the ball of the EURO 2012.

The big new redesign and upgrade will probably come out in conjunction with the World Cup 2014.