Bad boy Mario Balotelli decides to make a switch from Nike to Puma. 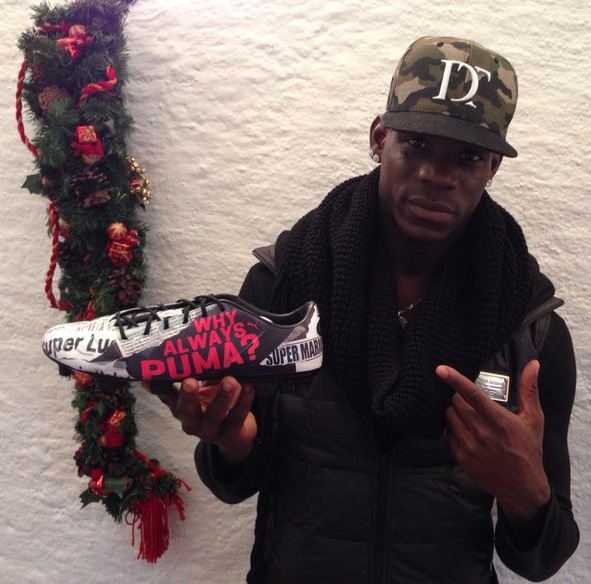 Never out of the news for long, Balotelli wore PUMA boots on pitch for the first time last week in AC Milan’s game against Roma, and again in the Milan Derby last night.  The PUMA evoPOWER Stampa FG were covered in the news headlines that have defined his career to date.

Mario Balotelli is a key signing for PUMA, and will become a key asset in PUMA’s brand and football communication over the coming years. PUMA’s long-standing partnership with the FIGC (Italian Football Association) is another strategic focus in which the Italian Centre Forward will play a significant role.

Speaking about the new partnership with PUMA, Mario Balotelli said: “This is a great move for me.  From the early conversations I had with PUMA it was clear that they understand me, my personality and my ambition.  The product and marketing plans they have developed are very exciting and I will be proud to be associated with everything I have seen.  PUMA’s support for the Italian National team was another instrumental reason for me signing this contract and I am sure that the coming years will bring many good things for us all.”

Björn Gulden, CEO at PUMA commented: “Mario Balotelli is a world class football player who will become a key ambassador for PUMA as his passion, speed, agility and power make him a perfect fit for our brand. With the FIFA World Cup in Brazil ahead of us, 2014 will be an important year for PUMA. Having Mario to complement an already strong sports-marketing portfolio, he will support our new brand mission ‘Forever Faster’ which will have a significant impact for the PUMA brand.”